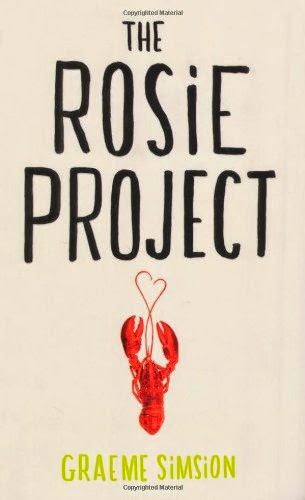 The Blurb
The Rosie Project by Graeme Simsion is a story about love, life and lobsters...

Meet Don Tillman.
Don is getting married.
He just doesn't know who to yet.
But he has designed a very detailed questionnaire to help him find the perfect woman.
One thing he already knows, though, is that it's not Rosie.
Absolutely, completely, definitely not.

Telling the story of Rosie and Don, Graeme Simsion's The Rosie Project is an international phenomenon, sold in over thirty countries - and counting.

Don Tillman is a socially challenged genetics professor who's decided the time has come to find a wife. His questionnaire is intended to weed out anyone who's unsuitable. The trouble is, Don has rather high standards and doesn't really do flexible so, despite lots of takers - he looks like Gregory Peck - he's not having much success in identifying The One.

When Rosie Jarman comes to his office, Don assumes it's to apply for the Wife Project - and duly discounts her on the grounds she smokes, drinks, doesn't eat meat, and is incapable of punctuality. However, Rosie has no interest in becoming Mrs Tillman and is actually there to enlist Don's assistance in a professional capacity: to help her find her biological father.
Sometimes, though, you don't find love: love finds you...

The Review
This was actually a reread, but I originally read it before I started my blog.  And I've got to say I am so glad I reread it.  It was even better the second time around, maybe because I understood the dynamics between the characters so much more.

This really is a heavily character driven book.  Don, a professor with Aspergers, is incredibly likeable, particularly because his thought process is so straightforward. There are people around him, the Dean at the University for example, who don't understand his behaviours, but essentially Don is a good guy, looking for love in the methodical, scientific way which seems natural to him.  Rosie is strong, quirky, clever- but she is complicated and her sometimes guarded nature confuses Don.  Other characters (particular mention for Don's friend Gene) are also well crafted by Simsion and this is one of the major strengths of the book.

That isn't to say there is no plot, because there is.  Don looking for love via a questionnaire and helping Rosie find her biological father is strangely engaging.  When I was first given this book I really didn't think it would be something I'd enjoy, but it has become one of the books I recommend to anyone who wants to read something they perhaps might have missed.

The Rosie Effect is out this week (which is what prompted the reread) and I cannot wait.  These characters deserve a long running series, not just a sequel.  I want to know more about Don and Rosie, because I fell in love with them.  I defy you not to fall in love with them too.