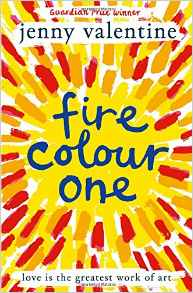 The Blurb
A bold and brilliant novel about love, lies and redemption, from award-winning author, Jenny Valentine – one of the greatest YA voices of her generation.

Iris's father, Ernest, is at the end of his life and she hasn't even met him. Her best friend, Thurston, is somewhere on the other side of the world. Everything she thought she knew is up in flames.

Now her mother has declared war and means to get her hands on Ernest's priceless art collection. But Ernest has other ideas. There are things he wants Iris to know after he's gone. And the truth has more than one way of coming to light.

The Review
I've been reviewing for a long time - here on Books with Bunny, on Amazon, Goodreads, book forums...and normally it's a fairly easy process.  I've either liked a book or haven't.  I've appreciated the writing or I haven't.  I've liked (or hated, or connected in some way with) the characters or I haven't.  But when it comes to this book, it's very difficult for me.

Personally, I found it incredibly 'middling' in every sense.  Whilst it was readable, I wasn't swept away and after I'd put it down I didn't find myself itching to pick it back up.  I'd expected it to feel incredibly edgy because of Iris' pyromania, and I half hoped for an element of danger which never really took over to the extent I'd hoped.

That's not to say I didn't like Fire Colour One.  Iris was an interesting protagonist, a sparky (in more ways that one) female who is fighting against the materialistic world she's part of.  But for some reason I found it hard to connect with her, and although I did care (especially when her dreadful mother was making my skin crawl with her greed and self-centred ways) something didn't quite click.

The main strength of Fire Colour One was the stylised writing.  Every so often a sentence would blow me away because it was so beautiful to read.  And the ending had me cheering in delight!  However, there was something lacking for me in this short read that I can't quite put my finger on - it just didn't 'zing'.

A nice enough read, but didn't pack the punch I was hoping for.

Fire Colour One is out now, published by Harper Collins Children's.

With thanks to the publisher for providing me with a copy of this book in return for an honest review.
Posted by Katey Lovell at 02:30