The Dinosaur that Pooped the Past- Tom Fletcher and Dougie Poynter 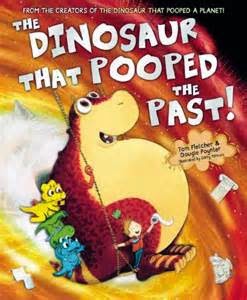 Oh. My. Word.  There is a new Pooping Dinosaur book out!  Let's just say there has been a bit of excitement about this one in our house (and not just from my son-we both squealed in equal measure when it landed on the doormat).  I love McFly and have long been aware of the warped sense of humour the band have, but my son Zachary knows Tom and Dougie only as authors-he didn't believe me when I went to watch McBusted and said Tom and Dougie were in the band!

It's Danny's Gran's birthday, her party's today
But Danny and Dinosaur just want to play.
She's filled up the table with food that is green,
Probably the most green food you've ever seen.
Sweeties and biscuits and cakes it is not
But with one giant gulp Dinosaur eats the lot.

They head to the garden to play on the swing,
When suddenly something strange starts happening.
They're swinging and looping and going real fast
Then SNAP!- with a bump they're both in the past.

But Danny and Dino spy cracks in the dirt.
OH HELP, A VOLCANO IS GOING TO SPURT!
The lava is dangerous, the lava is hot,
This volcano could wipe out the past, the whole lot!
But Dinosaur knows just what he can do
He can save the whole lot with a rip-roaring poo.

It's pretty disgusting, but you want specifics?
He's pooping Egyptians who love hieroglyphics!
He poops baby dinosaurs, cute as can be,
He even poops Roman and Trojans, you'll see!
He's pooping out artefacts, ancient and rare,
This dinosaur poop's going everywhere!

Of course, in the end they are all safe and sound
They're back in the future, with feet on the ground.
With Dinosaur's help they escaped the great quake
and are back to eat Gran's birthday broccoli cake.

This book is disgusting (it's all about poo),
But I must admit it is hilarious too.
The pictures are awesome, eye-catching and bold,
And the story in rhyme? It is comedy gold.

My six year old's view when I asked him to rate?
'The Dinosaur That Pooped the Past is just GREAT'.

With thanks to Random House Children's Books for providing me with a copy of this book in return for an honest review.

The Dinosaur That Pooped the Past is out now.