Well, I've been without a laptop for the past month.  It's been VERY annoying.  And not exactly conducive to blogging.  So, instead of individual posts, I decided the best way to catch up on reviews would be to do quickfire posts by genre, starting with my favourite- Young Adult.

So, here's what I've read this summer... 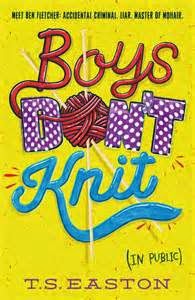 Ben Fletcher must get to grips with his more 'feminine' side following an unfortunate incident with a lollipop lady and a stolen bottle of Martini Rosso from Waitrose.

All a big misunderstanding of course.

To avoid the Young Offenders unit, Ben is ordered to give something back to the community and develop his sense of social alignment. Take up a hobby and keep on the straight and narrow. The hot teacher he likes runs a knitting group so Ben, reluctantly at first, gets 'stuck in'. Not easy when your dad is a sports fan and thinks Jeremy Clarkson is God. To his surprise, Ben finds that he likes knitting and that he has a mean competitive streak. If he can just keep it all a secret from his mates...and notice that the girl of his dreams, girl-next-door Megan Hooper has a bit of a thing for him...

Laugh-out-loud, often ridiculous, sometimes quite touching, and revelatory about the knitting world, Boys Don't Knit is a must for boys and girls...

The Review
This book is laugh out loud funny.  From the scene where Ben and his friends try and steal alcohol (from Waitrose, no less) I was hooked.  I loved Ben- he's a teenager bumbling through life, wondering how on earth he finds himself in the situations he does.  He's a bit like one of The Inbetweeners, certainly not perceived as cool by the majority of his peers, yet desperate to fit in-or at least, not stand out.

Don't let the knitting bit throw you, this book is about friendship, family and challenging stereotypes rather than crafting.  I enjoyed it much more than I expected to, and will definitely be getting hold of a copy of the sequel, An English Boy in New York.

If I had to describe it in one word= hilarious

With thanks to Hot Key books for providing me with a review copy of this book in return for my honest opinion.  Boys Don't Knit is out now.

Lola and the Boy Next Door- Stephanie Perkins
The Blurb
Budding designer Lola has an outrageous sense of style, a hot rocker boyfriend and big plans for the future. Everything is perfect - until Cricket Bell returns to the neighbourhood. When he steps back into her world, Lola must reconcile a lifetime of feelings for the boy next door. And perhaps discover that true love can be closer than you think. 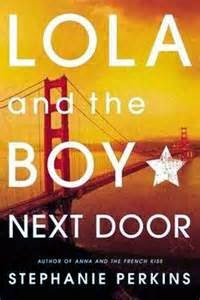 Earlier this year I read Anna and the French Kiss and fell truly, madly, deeply in love with its hero, Etienne St Clair.  I was literally itching, like a girl with intense allergies, to read the next in the series, Lola and The Boy Next Door.

Firstly, it isn't a sequel as such.  Anna and Etienne do have small cameo appearances throughout (which disappointed me somewhat- Etienne was nowhere near as alluring as he was in Anna), but this is very much the story of Lola, the quirky girl who has two Dad's and an alcoholic mother, and Cricket, the 'boy next door'.  And their story is angsty, and cute, and touching.  If I fell in love with Etienne, I full on adored Cricket Bell, despite his ridiculous name.  He's been living in his twin sisters shadow his whole life, but instead of being bitter, he's genuinely happy to support her as she strives for her dreams.  How sweet is that?  He's a bit of a geek, but that's part of his charm.

The plot is a 'will they/won't they' tug of war and as I got to know Lola and Cricket more as the book progressed I wanted to bash their heads together until they realised just how perfect they would be together.

It's got a different feel to Anna and the French Kiss, but is just as enjoyable.  I can't wait to read the final book in the series, Isla and the Happily Ever After. 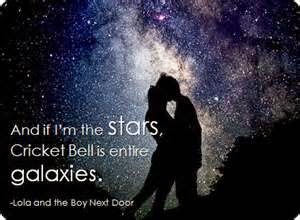 If I Stay- Gayle Forman
The Blurb
Life can change in an instant.

A cold February morning . . . a snowy road . . . and suddenly all of Mia's choices are gone. Except one.

As alone as she'll ever be, Mia must make the most difficult choice of all.

Gripping, heartrending and ultimately life-affirming, If I Stay will make you appreciate all that you have, all that you've lost - and all that might be. 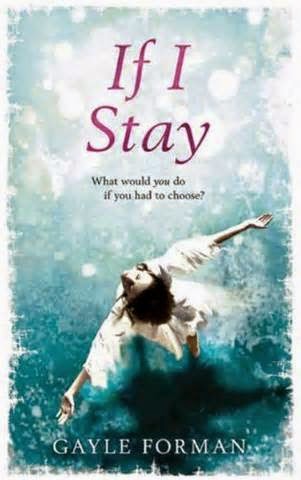 If I Stay is that dangerous beast- a book which has received so much hype that the reader expects A LOT.  And I did expect a lot from this book.

The premise, that Mia is hanging somewhere between life and death and needs to choose whether to pull through, is interesting.  It's a thought provoking concept.  But I'm not going to lie, I found it hard going in places.  I wouldn't say it's the kind of book you can enjoy.  Appreciate, yes.  But enjoy?  No.  Whether my age played a part in that, I don't know.  I'm not the target audience, although Forman has definitely passed that transitional line into crossover fiction.  Maybe it was particularly hard for me, as a mother, to contemplate how it would be for a child to lose her whole family?

The strangest thing about this book is how it was only at the end that I realised how much I cared about the characters and their fate.  Yes, there is a love story at the heart of If I Stay, but it's more than that somehow.  It's kind of heartbreaking.

Gayle Forman either has a natural talent for creating engaging characters or she works hard at crafting them.  Not just the leads, but the hospital staff, Mia's best friend Kim...I felt as though they were real people, not just characters in a book.

I didn't know how it would end, which is a feat in itself, and I can see why it has been made into a film.

Does it deserve the hype?  I'm not quite sure.  When I was reading it, I didn't feel much.  But at the end I had ALL THE FEELS.  So I'm a bit torn.  But would I recommend it?  Yes.  Definitely.

With thanks to Random House Children's Publishers for providing me with a review copy of If I Stay in return for my honest opinion.

So those are the YA books I've read this summer.  They've all been crackers.
Posted by Katey Lovell at 10:47