Books for Christmas- A guide to buying those last minute presents

Last minute shopping getting you flustered?  In my opinion you can't go wrong with a book, and here are my recommendations for the game addict, teenager, fangirl and bibliophile in your life.

For the one addicted to games-
Collins Little Book of Bananagrams

If you're buying for one of the many Bananagrams addicts out there, then this little book of hints and tips could be the perfect stocking filler.  It's a handy, pocket-sized guide of useful ways to work challenging letters into a game, variations to the traditional game and even ways to get extra vital seconds of time over your opponent (who knew there was such a knack to turning over tiles?)

My only slight gripe is there are LOTS of exclamation marks and ellipses in this book, which when you read it cover to cover rather than dipping in and out can be a bit much.  However, the book fulfils exactly what it sets out to, so I can't argue with it as a fun gift for the wordaholics.

After reading this I'm expecting to win every game of Bananagrams I play over Christmas and reign as Top Banana in my house. There's been a lot of furore over this one, especially the question did 'Zoella' write it herself ?  (The answer to that is no, it was ghostwritten).  Most importantly, is it worthy of the hype?

I have to say I really enjoyed Girl Online.  It's not a lifechanging book, not the best written, it's predictable.  But I found myself whizzing through, keen to find out if Penny and Noah had a future.  It's a contemporary look at teen life which examines the effect social media has on friendships and relationships, and as a blogger myself I thought it really came across how a community can come together through shared interests and discussion.  Personally, I would have liked to have seen more of Penny's blog posts and feel it would have allowed further character development and for me as a reader to get to know more of her innermost thoughts.

There are plenty of fantastic YA books out there right now, but if you're looking for the must have book for teen girls this Christmas then you can't go wrong with Girl Online.

For the fangirl-
McBusted- Jennifer Parker For the die hard fans of Busted and McFly, McBusted feel like a bit of a compromise.  True, there's an overlap in their guitar-led musical styles, their devil-may-care attitudes and their lack of conformity towards mainstream fashions, but they have very definite fanbases of their own.  However, now McBusted are an actual bone fide band rather than a bit of a musical experiment as it first seemed (their debut album as a six piece released last month signifying this as a serious project for all involved rather than the extended 'lad's trip' of music, madness and mayhem which doubled as their 2014 tour), they earned a book of their own.  And Jennifer Parker was the one to write it.

If you've ever been a fan of Busted and/or McFly then you'll find excerpts from interviews and the official books quoted throughout familiar.  It's probably most suited to a newbie to the fandom. Although this is an unofficial product, there's obviously been great care taken to make this book as reliable and trustworthy as possible- not something which can always be said when it comes to unofficial books about popstars.

There are plenty of pictures for your visual pleasure and if your fangirlling heart doesn't beat faster reliving Harry's bulging biceps during Strictly Come Dancing or Danny's half unbuttoned shirts (hello chest hair!) then there's something seriously wrong.

If you can't give the gift of Mr Judd or Mr Jones to the McBusted fan in your life this Christmas (and you can't- sadly they're already spoken for) then this book could well be the next best thing.

For the bibliophile-
The Bookshop Book- Jen Campbell 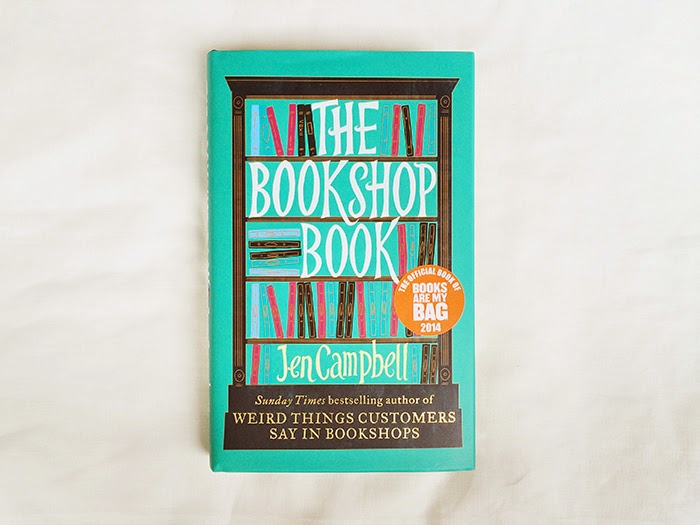 I don't know where to start with this one.  My mind was literally blown.

I guess it's pretty obvious that I'm totally and utterly smitten by all things books.  I wouldn't have a blog dedicated to them if I wasn't!  And bookshops are even better, so many of these beautiful word-carrying, dream-fuelling objects all gathered together in one space.

The Bookshop Book shares the stories of some of the best/most unique/most famous book shops in the world, as well as those of the people who run them and the people who keep them going.  I beamed continually as I read this book and made a mental list of the ones I desperately need to see for myself!

So be warned, this is a great present for anyone who loves books and bookshops, but may lead to daydreaming and wanderlust.

With thanks to the publishers of McBusted, The Bookshop Book and Collins Little Book of Bananagrams for providing me with a copy of these books in return for an honest review.
Posted by Katey Lovell at 11:24