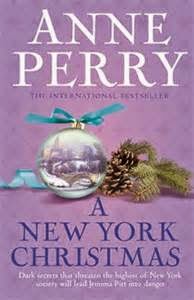 New York, 1904. Jemima Pitt arrives in a city where new American money and old English aristocracy collide. She's here to chaperone her friend, Delphinia, who has crossed the ocean to marry one of New York's richest men, but Jemima discovers a secret that could destroy Phinnie's future. Drawn into the crisis, Jemima desperately wants to protect her friend. And she must use all her courage and wits to decide whom to trust, and how to thread her way through the snowy streets of this brash new city. A New York Christmas is the enthralling new festive tale from the master of Victorian mysteries.

I wasn't sure whether this would be my kind of book, if I'm honest.  Whilst the cover was Christmassy and I am a true New York-phile, I worried that this might be a bit granny-ish.  It just gave out that kind of vibe.  However, I'm pleased to say it wasn't and I easily read it over two sittings.

A New York Christmas is a short read, only 160 pages, which gives a glimpse into a wealthy world. I do love a bit of glamour, but this book is a bit more gritty than that.  Chaperone Jemima finds herself embroiled in a mystery relating to Delphinia's mother and soon there are accusations aplenty and fallings out among the elite.

I was interested to know what would happen and had no idea that it was going to have the twists and turns it did, but the ending of this one was a disappointment to me.  In my opinion the final ten pages or so were just a stretch too far, unfortunately, and tried to cram too much in.  It was as though the slow build up came to a sudden end, like the author was trying to wrap up the book to meet a deadline or fit into a certain number of words.

That said, I can see why Anne Perry has a large fan base, her writing was easy to read and her characters strong and vivid.  Fans of the Victorian crime and mystery genre may well enjoy this book.

Finally, whilst it is a festive read according to the title, I would have preferred a stronger Christmassy vibe-especially as it was earmarked as my first Advent-ures in Fiction book for the year!

A New York Christmas is out now, published by Headline.

With thanks to the publisher for providing me with a copy of this book in return for an honest review.
Posted by Katey Lovell at 03:00