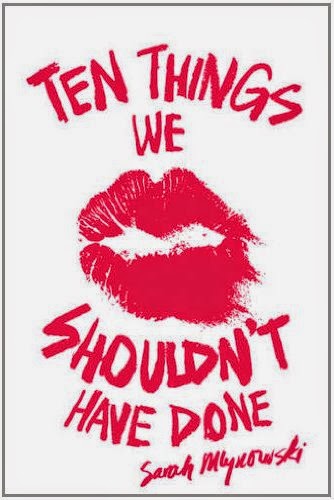 The Blurb
I was about to live a sixteen-year-old's dream.
House on the beach.
No parents.
Parties whenever we wanted.
Boys wherever we wanted.

April and her best friend, Vi, are living by themselves. Of course, April's parents don't know that. They think she's living with Vi and Vi's mum. But it's not April's fault that her dad decided to move away in the middle of high school. So who could blame her for a little white lie? Or the other nine things that April (probably) shouldn't have done that year...

The Review
I saw this book in Waterstone's and was immediately drawn in by the eye catching cover- simple, yet bold.  And when I read the blurb, I knew this would be a book I'd enjoy.

There is typical teen melodrama when April realises her family doesn't revolve just around her, and after a few well-told untruths she moves in with her best friend Vi.  They end up in a lot of scrapes- a hot tub, the obligatory teen parties, gaining a kitten being just some- and April realises that life as a grown up is not always all it's cracked up to be.  Throw in some boys just to make things that bit more messy and voila!  You'vre got Ten Things we Shouldn't Have Done.

This is a fun book with some serious messages, and reading it has definitely made me keen to seek out more by this author.  It's a YA book with enough bite for the haters who say 'but they're for teenagers!' when I tell them I'm reading this genre, and it is chock full of action and drama.  I read it over two days and loved every second of it.

The perfect read to drag me out of my reading slump- thanks Ms Mlynowski! 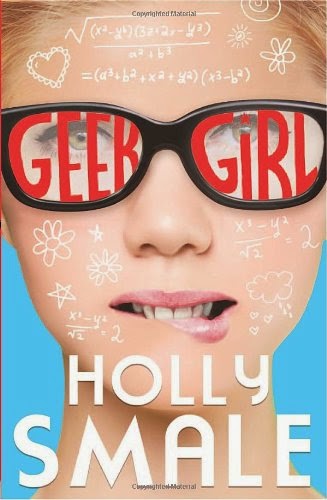 The Blurb
“My name is Harriet Manners, and I am a geek.”

Harriet Manners knows that a cat has 32 muscles in each ear, a “jiffy” lasts 1/100th of a second, and the average person laughs 15 times per day. She knows that bats always turn left when exiting a cave and that peanuts are one of the ingredients of dynamite.

But she doesn’t know why nobody at school seems to like her.

So when Harriet is spotted by a top model agent, she grabs the chance to reinvent herself. Even if it means stealing her best friend's dream, incurring the wrath of her arch enemy Alexa, and repeatedly humiliating herself in front of impossibly handsome model Nick. Even if it means lying to the people she loves.

Veering from one couture disaster to the next with the help of her overly enthusiastic father and her uber-geeky stalker, Toby, Harriet begins to realise that the world of fashion doesn't seem to like her any more than the real world did.

As her old life starts to fall apart, will Harriet be able to transform herself before she ruins everything?

I'd actually bought Geek Girl a while ago and put it to one side, now I am wondering why on earth I did that as I am desperate to move straight on to the second book in the series!  It is just so much FUN.  I loved the scene where Harriet is 'discovered' and her first photoshoot had me laughing out loud (I wouldn't be able to stand in ridiculously high heels, I can tell you that now.  And with snow in the mix too, I'd be on my way to A and E).

It's a bit like a Louise Rennison book in style, which is only a good thing if you're a teen book, right? And you certainly don't have to be a cool kid to relate to the characters, because they are just typical teenagers wandering around with insults graffitied on their bags, trying to fit in (or at least, not stand out).

If these books had been around when I was younger I'd have read them back to back over and over again.  Actually, who am I kidding?  I'll probably still do that now.  After all, books are for enjoying, and whilst I'm not the target market, I can honestly say I'm a fan of Holly Smale's after reading Geek Girl.
Posted by Katey Lovell at 03:00