Waiting for Doggo- Mark B. Mills 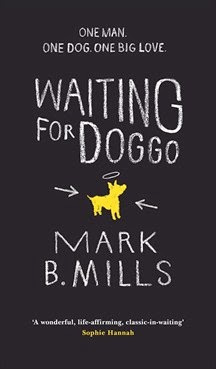 One man. One dog. One big love. The perfect novel for anyone who loves MARLEY AND ME, IT'S A WONDERFUL LIFE or ONE DAY.


No-one ever called Dan a pushover. But then no-one ever called him fast-track either. He likes driving slowly, playing Sudoku on his iPhone, swapping one scruffy jumper for another. He's been with Clara for four years and he's been perfectly happy; but now she's left him, leaving nothing but a long letter filled with incriminations and a small, white, almost hairless dog, named Doggo. So now Dan is single, a man without any kind of partner whether working or in love. He's just one reluctant dog owner. Find a new home for him, that's the plan.

Come on...everyone knows the old adage about the best laid plans and besides, Doggo is one special kind of a four legged friend...and an inspiration.

There's been plenty of hype about Waiting for Doggo (or just plain 'Doggo', as it is affectionately known for short).  Other bloggers raved about it and the publicity team at Headline have gone all out to make sure that we know about this book.  To say I had high expectations is an understatement.

The book is actually mainly about Dan, Doggo's owner.  He's the kind of guy who blunders along through life, not quite sure what's going on around him. And since his long term partner Clara left him suddenly, he's had even more doubts about what he wants.  And what he does wants, and ultimately does, is surely going to only cause more chaos in the long run.  So how on earth can he take responsibility for a dog, not least a dog his ex rescued from Battersea on a whim?

Dan throws himself into his job, taking Doggo to work with him, and before long the scruffy, unattractive mutt (Doggo, not Dan) soon becomes part of the furniture, livening up the office and the everyday work scenes which might otherwise have seemed borderline mundane in print.  The little anecdotes about Doggo delivering the mail for example, were cute and evocative.

It is Dan's workplace which is so much like many other working environments, which had me laughing.  The boss, the wannabe, the Billy big bollocks full of eye-rollingly bad ideas...they're all there, and you'll recognise them from your own experiences.  Mark B Mills certainly knows how to create a character that will make you feel.  And Doggo himself will certainly do that.  He's the ugly, oddball dog that they never thought they'd be able to rehome.  And he has a weird obsession with Jennifer Aniston.  But I loved him.

This isn't a gripping mystery, or a passionate romance.  It isn't a gory crime, or a laugh out loud comedy.  But it is a story of a likeable man, with his best-mate of a dog, and how together they approach a life-changing period.  Waiting for Doggo brims with positivity and hope.  It will make you believe that you can.  It is a book which is difficult to categorise and it's equally difficult to explain just how Doggo captured my heart and captivated my mind.  Touching doesn't cut it.  Engaging only skims the surface.  Heartwarming sounds all too twee, especially when you consider the Tupperware scene (you'll know it when you get there).

I can only say it is unique, and that I found myself turning page after page even when part of me wasn't sure why.  I was strangely hooked.  Doggo won me over.

And with that ending, there has to be another instalment at some point, surely? I need more Doggo in my life.

Waiting For Doggo is released on November 20th, published by Headline.

With thanks to the publishers for providing me with a copy of this book in return for my honest opinion.