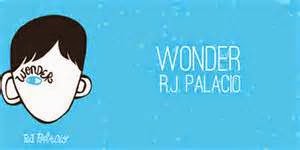 'My name is August. I won't describe what I look like. Whatever you're thinking, it's probably worse.'

Auggie wants to be an ordinary ten-year-old. He does ordinary things - eating ice cream, playing on his Xbox. He feels ordinary - inside. But ordinary kids don't make other ordinary kids run away screaming in playgrounds. Ordinary kids aren't stared at wherever they go.

Born with a terrible facial abnormality, Auggie has been home-schooled by his parents his whole life. Now, for the first time, he's being sent to a real school - and he's dreading it. All he wants is to be accepted - but can he convince his new classmates that he's just like them, underneath it all?

I honestly don't know where to start with this one.  I'm not sure there are enough superlatives in the dictionary for me to spout out, and I don't know if I can convey how much love I have for this book.  But I'll try and explain to you just why I love Wonder so much.

First, let's talk about August.  He's different.  Or rather, he looks different, but as you read his thoughts and fears you appreciate that he's actually experiencing life in exactly the same way as everyone else.  He's nervous about starting a new school, he worries what people will think of him, he doesn't want to be judged purely on his Star Wars obsession.  But because August looks so different to his peers, he is stared at wherever he goes, openly mocked, ignored or told he is repulsive.  Life for August isn't easy.  He can't just be a ten year old boy, he's 'The Freak', 'The Ork'.  The other children at his new school don't understand why he looks like he does, and most are afraid of him purely because of his appearance.

August is ridiculed throughout, particularly by privileged Julian and his hangers-on.  It is uncomfortable to read and I am not ashamed to admit there were tears on numerous occasions.  However, the friendships August does make shine through.  His lunchtime pal Summer is beautiful inside and out, and as warm as her name would suggest.

Told through the eyes of August, his family and his peers, it examines how one person can affect the lives of people around them.  It will cause you to consider your own actions and words more closely, and although I wouldn't call it an easy read because it will challenge your thinking (emotive-yes, engaging- yes, easy-no), it is beautifully simplistic in its message. 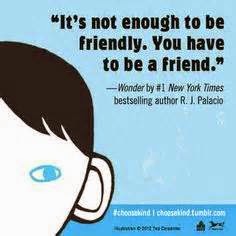 As an adult reading Wonder (particularly one who has worked in education for the last sixteen years), I was especially interested in the portrayal of the teachers in the book.  Mr Browne, the English teacher with a penchant for precepts, is wonderful.  He encourages children to be introspective, to become better people and most of all to 'choose kind'.  Every child should have a teacher like him for at least one year of their schooling (I very fortunately had a brilliant teacher for two years, Mr Richards, who taught kindness and empathy alongside poetry and creative writing).  The Head teacher, Mr Tushman is also a brilliant character.  I'd say he has a quiet power, and a real knowledge about just what is going on inside his school walls.
It is impossible to explain just why this book is such a hit with adults and children alike except to say it is truly unique, and a book which deserves to be read, and reread until we are all better, kinder people.  It is one of my favourite reads of the year, hands down.
So my final message to you is to choose Wonder.  And most of all, choose kind.

New editions of Wonder contain The Julian Chapter (which can also be bought separately), giving the viewpoint of the ringleader and bully.  Equally as well written as Wonder, and just as powerful, I was brought to my knees by this addition to the book.  It could so easily have been overkill, but RJ Palacio judged this one just right.
WIN!
To raise awareness of Anti-bullying week, the publisher has very kindly given me a 'Wonder Bundle' to dish out to one lucky reader.  To enter, simply comment below telling me why you should win, or tweet using the hashtags #bwbwonder and #choosekind.  A winner will be selected at random on Tuesday 26th November. Due to postage costs, I am sorry that this is a UK only competition.