Roy- The Roy of the Rovers autobiography 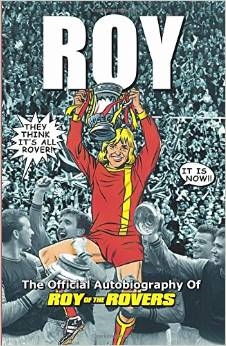 The greatest story ever told by the world’s most beloved sportsman, Roy of the Rovers, in his own words for the first time.

The shocking details of the five terrifying kidnappings that threatened to blight his playing career; the stomach-churning murder attempt in 1980, which left Roy in a life-threatening coma; the sickening car bomb attack that tragically killed eight of Roy's team-mates while on a pre-season tour of Basran; the devastation of losing his wife, former Melchester club secretary Penny Laine, who died in a car accident that brought Roy closer than ever to quitting the game he loved.

And finally the horrific helicopter crash in 1993 that resulted in the amputation of Roy's legendary left foot, bringing the curtain down on his sensational, game-clinching, goal scoring exploits.
Candid, emotional, optimistic, and never nothing less than inspiring, the autobiography of the man all fans of the game know simply as Roy Race aka 'Roy of the Rovers' lays bare for the first time the truth behind soccer's ultimate fairy-tale story.

It’s all Rover, and it is here for the first time for his fans to enjoy all in one victorious book.

Roy Race (AKA Roy of the Rovers) is the perfect football hero.  He's successful, a family man and dedicated to his beloved Melchester Rovers in a way that few modern day footballers are.  He's one on his own, and I'm surprised he (ahem) hasn't written an autobiography before now.

I really wanted to love this, to fondly relive some of the moments from the comic strips of my youth, such as the Mel Park earthquake.  Unfortunately, I found it a bit lacking.  Firstly, I found the discrepancies between the blurb and actual text of the autobiography irritating, for example the 'eight FA Cups' of the back cover to the ''eleven times' FA Cup winner mentioned on p112 and 'five terrifying kidnappings' which become being 'kidnapped nine times' on p131.  I don't know if it's supposed irony, playing on the hyperbole of the comic strips and Roy's confident demeanour or what, but I found it extremely frustrating. I'm not a big enough fan to know Roy's career history off pat, so I don't know which, if either, are factually correct.  Not good for an autobiography.

I would also have loved some of the iconic images of Roy's career in a picture section-after all, isn't that the bit we all flick to first in any autobiography worth its salt?  There was nothing like that.  I'm not sure if it was due to copyright, but I found that really disappointing.

Also, I am a massive fan of Penny and would have liked more of their life together to have been focussed on in the book.  Unfortunately, she comes across as little more than a baby machine, which isn't fair portrayal.

I'll be honest, I really wish it had been done as a compilation of the highlights of Roy's career in comic strip format-whether that was simply linking the strips that had been run over the years with snippets of text in between or completely reworking it but retelling the story we all know and love in the format we are familiar with.  I wasn't overly enamoured by the ghost writers style either, I'm convinced there are fans out there who could have done a better job of sharing Roy's inimitable story.

For me, I'm sad to say, it didn't work.  I'd say this is one for the 'die hards' but unfortunately I think most die hards would say this is a poor, inaccurate effort to recreate the magic of Roy's career and moreso his private life.

NB. Yes, I am fully aware Roy Race is a fictional character.

With thanks to the publisher who sent me a copy of this book in return for an honest review.

Roy is out now, published by Random House.
Posted by Katey Lovell at 09:24