Books about music are one of my major weaknesses so when I found about #boybandlit chat on Twitter I was in my element.  A group of likeminded readers and authors chatted about anything and everything to do with boybands and books for an hour (although it felt like five minutes, it was one of those strange time-twisting moments) and it made me desperate to devour even more books about music.

During 2016 I've read and reviewed (and loved ) Love Song by Sophia Bennett and Songs About a Girl by Chris Russell, and I've also read... 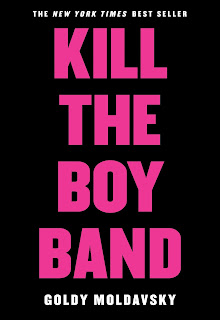 Fangirls get a bad rap all the time - people say we're weird, hysterical, obsessed, certifiable. But those people don't understand.

It's important you know that up front. Because everything I'm about to tell you is going to seem . . . well, crazy.

From thrilling debut author Goldy Moldavsky comes Kill The Boy Band, a pitch-black, hilarious take on modern fandom and the badass girls who have the power to make - or break - the people we call 'celebrities'.

Kill The Boyband has been a big YA book in 2016 and as such I had high hopes for it. As an out and out fangirl I was especially interested in how the girls were going to be portrayed.

I need to clarify that this is a very different book when it comes to bands and fandoms, exploring the obsessive (and possessive) nature of the fangirl.  I was a bit confused as to whether it was meant to be satirical, especially as the digs being made were predominantly at The Ruperts fans, when I imagine many of the target readership are likely to be fans of boybands themselves, or if it was supposed to be funny - either way something was lacking.  I also had some issues with sweeping generalisations about groups within the novel, the overweight, the gay, the rich kids...which again I assume were satirical but didn't quite come across that way.

There were elements of this book I liked - the language and dialogue and the dynamics between the band members were done especially well - and it has stayed with me since reading it in the spring.  However, I'm not sure it's a book I'd return to again because of the issues I mentioned above.

Aimee and the Heartthrob - Ophelia London 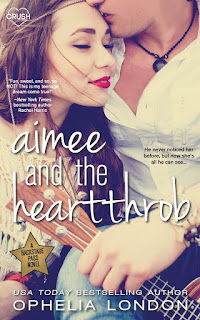 The Blurb
This Entangled Teen Crush book contains references to drug use, drinking, some sexual content, and lots and lots of kissing. Its swoonworthy hero may ruin all others for you. He never noticed her before, but now she's all he can see…
Miles Carlisle is every teen girl’s fantasy. His rugged good looks and exotic British accent have helped catapult his boy band, Seconds to Juliet, to super-stardom. But after two disastrous and very public breakups, Miles isn’t interested in dating just any girl; he wants The One. And the only girl he’s interested in is not only his best friend’s little sister - and off-limits - but won’t even give him the time of day…
As a kid, Aimee Bingham had a huge thing for Miles…until he made fun of her for always tagging along. Now that she’s outgrown both him and her pigtails, the prospect of spending two weeks on tour with the childhood crush who broke her heart isn’t exactly enticing. Except now Miles seems interested. Very interested. And no matter how hard Aimee tries to resist him, her crush is definitely making a comeback.
But everyone knows that falling for a heartthrob is a backstage pass to heartbreak…
The Review
I sometimes find the thought of starting a series daunting, especially at the moment as I've not got as much time for reading recently as I've had in the past.  However, I read this book as part of a readalong with another blogger (Hi Sofia!) and quickly found myself immersed in Aimee and Miles' story.
It's unapologetically romance, and I loved that it didn't try to be anything else.  It reminded me a lot of the Sweet Dreams books I devoured as a teenager - a sprinkling of angst, a forbidden romance and a lot of kissing.
I'm definitely interested in reading the rest of this series and finding out more about the rest of the band.  If you're looking for all-out boyband romance, this could be the series for you.
My Secret Rockstar Boyfriend - Eleanor Wood 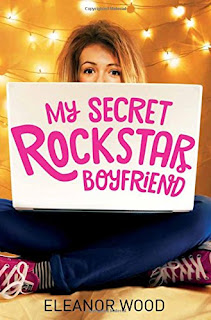 Tuesday Cooper is happy being normal -doing her a-levels and indulging in her twin obsessions: buying weird vintage clothes in charity shops and writing her beloved music blog (which nobody ever reads). Her love for music started when she was thirteen and had a massive crush on Jackson Griffith, teen rock god and SUPER HOT LOVE OF HER LIFE. Now Tuesday's eighteen and has moved on to fancying boys in real life and Jackson went off the celebrity radar years ago.
So it can't be him that's messaging her on her blog, can it?

From one girl's computer to the pyramid stage at Glastonbury Festival, this is a love story for anyone who has ever wished that someone would sing a love song just for them.

Dreams can come true . . .
The Review
﻿
This was a book I stumbled across at the library and picked up on a whim - and I'm so glad I did!  Eleanor Wood has done a brilliant job of writing a fun, romantic, quirky novel about an ordinary girl who meets a superstar band member.  Tuesday and Jackson end up in a complicated situation where fame and normality collide, resulting in a story far more poignant than I would have expected.
I laughed out loud on more than one occasion and had a lump in my throat during the darker moments - this YA book had it all.  If you love books about bands, you really need to give this one a try.﻿

Have you read any books about singer/bands that I really need to read?  I'd love any recommendations!
Posted by Katey Lovell at 22:44