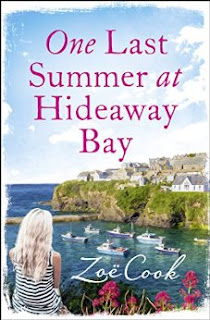 Secrets lie waiting beneath the Cornish waves in this moving and unforgettable love story. Perfect for fans of Nicholas Sparks, Kelly Rimmer and Jojo Moyes.

Lucy, hi. It’s Tom. How are you? It’s been a while. I’ve been meaning to get in touch but it’s hard to know how to after so much time. I hear you’re doing really well up there. I knew you would be.
You should come here, you know, back to Hideaway bay. Come and see everyone, see how little it’s all changed. Feel the sand between your toes, the Cornish sea breeze on your face. When the sun hits the surf in that way it does, it’s as magical as ever.

I still think about you.

I read this book as part of the Harper Impulse #SummerImpulse readathon and was very keen to get stuck in.  Bloggers and reviewers have been speaking highly of this debut novel from Zoe Cook and I was excited to see if it lived up to the hype.

The story starts with Lucy living the high life in London.  Outwardly, it looks like she's got the lot - a glamorous job, a party lifestyle, and a group of friends who share her recreational drug use habit - but as she reflects on life following contact from her childhood sweetheart Tom, she realises that maybe it's all a façade.  As Lucy heads home to Cornwall's Hideaway Bay, she's unprepared for the life-changing summer that lies ahead...

The first section of the novel set the scene and gave an overview of Lucy's chaotic London lifestyle, which contrasted well with the quieter pace of Cornwall life depicted later in the book.  Personally, I felt the London section could have been slightly shorter and still amply given the juxtaposition between the two settings. I think I was ready to be whisked to Cornwall earlier in the story given the summery cover and blurb.

Lucy is not always a likeable protagonist, but that didn't detract from the empathy I felt towards her. If anything it made her seem a rounded, 'human' character and more believable.  Tom was definitely the easier to warm to of the two main characters.  I liked the periphery characters too, and would love to find out more about their backstories in sister novels.

This book may appeal to fans of David Nicholls and Jojo Moyes and is a well-crafted debut novel from Zoe Cook.

With thanks to Harper Impulse for providing me with a galley copy of this book in return for an honest review.