I am part of a really amazing book group.  We have been meeting since the end of last year when my friend Jess put a status on facebook saying 'Is there anyone out there who would be interested in a book group?'  I jumped at the chance.  There are seven of us in the group, all female, all of a similar age, all Christians and with a similar outlook on life.  We have never had a meeting when we are all there.  Infact there is one member of the group I haven't ever met-we never seem to make the same meetings!  Anyway, I digress.  I just wanted to give you a bit of background as to what lead me to read Gone Girl by Gillian Flynn. 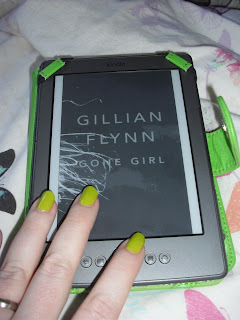 Gone Girl was my choice for book group read.  I had seen it everywhere-number one in the bestseller lists, people reading it on the bus, people talking about it on the online book communities...I wanted to see whether it was worth the fuss.

Riddled with suspense and a plot with so many twists that a corkscrew rollercoaster would be envious, Gone Girl is a gripping psychological thriller that will keep you doubting yourself.  It is hard to talk about the plot too much without spoilers, so I'll keep it brief.

Amy Elliott Dunne is a daughter, wife and well-known public figure, the inspiration for the bestselling Amazing Amy books.  On their fifth wedding anniversary, her husband Nick arrives home to find their house ransacked and Amy gone.

Gone Girl records the year after Amy's disappearance, slowly drip feeding the reader information that will influence their suspicions.  The plot has many twists and turns, and this ensures the reader remains engaged.  It really is a page turner (what do you call a page turner on an ereader?  A button presser?), another read that is similar in style to Into the Darkest Corner by Elizabeth Haynes.

Did I feel it was worth the fuss?  Well, it is certainly a readable, accessible book that has an incredibly detailed and elaborate plot.  I found it quite a draining read-the subject matter was dark and warped which made it both thrilling and exhausting at the same time.  There has been much debate online about the ending, whilst I wasn't overly happy with it, it didn't detract from my overall enjoyment.

If you like thrillers and suspense, then I am sure you'll enjoy Gone Girl.  Do persevere if you find it hard to get into initially-once it gets going it really speeds up!  Gone Girl is to be made into a film with rumours that Ben Affleck is keen to play Nick- I think Bradley Cooper would make a better Nick to be honest, but it isn't up to me!  Either way, I'll probably be interested enough to see the film adaptation as long as the casting is reasonable.  It is written in a style that will lend itself well to the big screen, so I hope that it won't be a disappointment.

8/10 (which was the average score at book group too, and everyone said they would recommend it)
Posted by Katey Lovell at 09:20