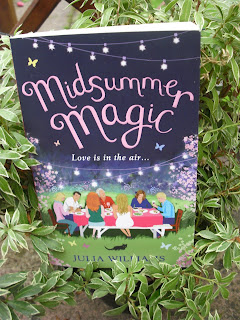 Julia Williams has taken inspiration from A Midsummer Night's Dream by giving Shakespeare's characters and storyline a modern twist.  Described as 'a captivating modern day tale' that will 'delight fans of Katie Fforde and Veronica Henry', Midsummer Magic is an entertaining novel.

The plot is split between two time frames.  Entertainers Tatiana and Bron and TV hypnotist Freddie Puck are followed through both these stories, mainly set in the present day but with regular flashbacks.  Their 80s heyday now long past, Bron and Freddie visit Cornwall to make a TV show based around local myths and legends.  The standing stones are believed to have magical qualities, providing true happiness to couples that spend the whole night there on Midsummers' Eve.

Newly engaged Josie and Harry are staying with family in Cornwall along with their future bridesmaid Diana and best man Ant.  Impressed by meeting Freddie, they agree to being hypnotised as part of the show.  How will they behave under Freddie's magical influence?

Inspired by one of Britain's best, Williams also portrays Britain at its best.  The descriptions of the landscape and flora are beautifully written so that the reader can visualise the scene, the characters are either realistic in their flaws (Ant, Diana, Josie, Harry) or caricatures based on celebrity culture (Bron, Freddie and especially washed-up has-been Tatiana).

I found this book to be an easy read- funny, with elements of farce and characters that are likeable.  Knowledge of A Midsummer Night's Dream (one of the plays I studied for A level English Literature!) helped my enjoyment as I was able to anticipate what would happen next, but is certainly not necessary to enjoy Midsummer Magic- ultimately a readable, humorous book which I am sure will be found by many a sun-lounger over the summer.

Midsummer Magic by Julia Williams is released  on July 4th 2013, published by Avon, an imprint of HarperCollins.

Many thanks to Avon at HarperCollins for providing me with a review copy of this title.  You can find out more about Julia Williams and her previous books at her website here.
Posted by Katey Lovell at 18:07