So, I'm here again with a further instalment of Autumn sauce!  Today I'm reviewing the final book in Pippa Croft's Oxford Blue trilogy (you can find reviews of the first two books by scrolling down the page here ) and the first book in Sylvia Day's successful Crossfire series.  Gorgeous male leads and sexy scenes aplenty... 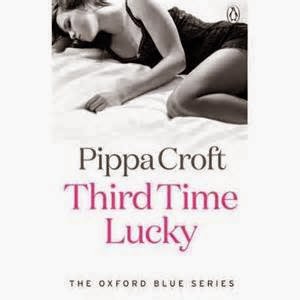 I consider myself extremely fortunate to have followed the Oxford Blue series from the very beginning, but of course there is one problem with being the first on the scene when it comes to trilogies/serials...the waiting!  I felt like I was waiting forever to get a copy of Third Time Lucky! But I can say it was well worth the wait.

Book 2 ended with a real cliffhanger (I don't want to give too much away here!) and now Lauren and Alexander face new challenges.  I loved how the impact of this gave Lauren more power- it was sexy and exciting and proved that Alexander needed her just as much as she needed him, in every sense.

There were also some highly entertaining scenes involving scheming bitch-face Valentina getting her comeuppance (finally!  Honestly one of my least favourite fictional characters-which proves she is well crafted) and the world's slimiest professor getting, shall we say, a cold shower of sorts.  I do love it when the baddies get their just desserts.

I wasn't particularly keen on the ending, that was the one part which didn't quite ring true for me, but appreciate that if this was to be the final instalment there needed to be a level of 'closure'.  However, I want more!  Please Pippa?!

And I am desperate for someone to come along and make a TV series of this.  It would go down a storm on E4.  Beautiful Oxford, country retreats, a man in uniform, the American girl, the glamorous Italian cowbag and of course oodles of racy scenes...it has it all.

If you are a fan of the New Adult genre and you haven't yet read the Oxford Blue series, you really must.  You'll be left clamouring for more.

With thanks to the publisher for providing me with a copy of this book in return for an honest review.  All three books in Pippa Croft's Oxford Blue series are out now.


Bared to You- Sylvia Day 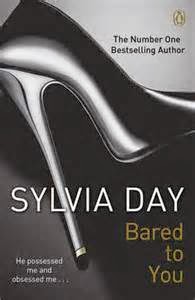 Yes, I'm probably the very last person in the world to read Bared to You. I'd heard so much about Sylvia Day and the Crossfire series, but one thing put me off.  'It's just like Fifty Shades...'

I'm not snooty about reading erotica/smut/whatever you want to call books with some explicit sex scenes AT ALL, but I do value a well-told story with strong characters and good structure.  That was what Fifty Shades lacked for me, and was why I didn't finish it.  But Bared to You was so much better!

I also really liked Eva.  She'd been figuratively suffocated by an overprotective mother and so of course, she's ready to go off the rails a bit when she escapes to the decadence of New York.  And when she meets the undeniably attractive Gideon Cross, there are naturally going to be fireworks.

I personally thought it was a very well written book- the characters grew as the story built, the plot was decent and the sex scenes were among the best I've come across in erotic fiction.  It is decadent, engaging and whipped me right into their world.  I'm not generally one of these women who lust over businessmen.  I love a man in a suit as much as the next girl, but I'm not that turned on by power.  But honestly, that guy... with his money and success, I could be drawn in, turning into a helpless little kitten like Eva, unable to resist him.

I've not yet read the rest of the series, but I definitely will be.

Sylvia Day, I am at your mercy.  Or at least, that of Gideon Cross.

Bared To You is out now, as are books 2 and 3.  Book 4 in the Crossfire series, Captivated by You is out on November 18th.
Posted by Katey Lovell at 12:06