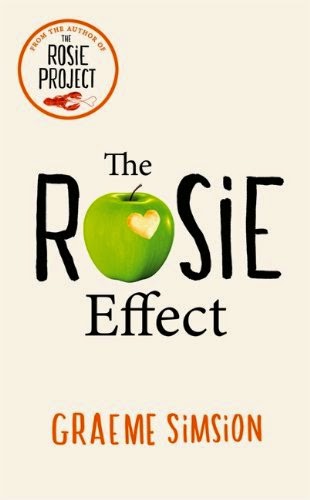 The Rosie Effect is the charming and hilarious sequel to Graeme Simsion's bestselling debut novel The Rosie Project.

Until a year ago, forty-one-year-old geneticist Don Tillman had never had a second date. Until he met Rosie, 'the world's most incompatible woman'. Now, living in New York City, they have survived ten months and ten days of marriage.

But though Rosie has taught him the joys of unscheduled sex and spontaneous meal planning, life is still not plain sailing for Don. Not least with the sudden arrival of his best friend Gene, serial philanderer, who takes up residence on their sofa.

Then Rosie drops the mother of all bombshells. And soon Don must face her hormonally induced irrational behaviour as he prepares for the biggest challenge of his previously ordered life - at the same time as dodging deportation, prosecution and professional disgrace.

Is Don Tillman ready to become the man he always dreamed of being? Or will he revert to his old ways and risk losing Rosie forever?

There are some books in life which are just special.  They manage to reach out and touch people, perhaps even changing opinions along the way.  The Rosie Project did just that (see my review here ).  It is one of my absolutely favourites, a stunning debut which first introduced us to the unlikely pairing of Don and Rosie.

The Rosie Effect carries on their love story, and like any other married couple out there, there are bumps in the road.  Impending parenthood is difficult for Don to comprehend and the book largely focuses around his efforts to learn the necessary skills to be a father.  He does this in typically Don like ways which causes chaos and leads to a deceptive nine months for both himself and Rosie.

I probably enjoyed this even more than The Rosie Project, in part because I was rooting so much for things to work out well between this unconventional, sometimes extremely irritating couple.  I love Don and Rosie, I really do, but their outlooks on life made me want to bang their heads together and say 'LOVE IS ENOUGH!!!  JUST DO YOUR BEST ALONG WITH THE REST OF THE WORLD!' But of course that would never do for either of them, what with Don requiring straightforward explanations and Rosie convinced that her way is the right way.

One of the best things about The Rosie Effect was learning more about Gene, Don's player of a best friend.  His infidelity made me dislike him immensely during the first book (although I thought as a character he was fabulous) but I warmed to him so much more this time around.

Graeme Simsion is an absolute marvel when it comes to creating warm characters that readers will care about. They are flawed, every single one of them, but they still have charm, beauty, redeeming features.

I can honestly say I want to read everything Graeme has ever written.  Shopping lists, exam papers- I don't care.  He manages to put a thought provoking spin on everything he writes and as a reader I find that both challenging and engaging.

I NEED to know what happens next.  And fast.

No pressure, Mr Simsion, no pressure...