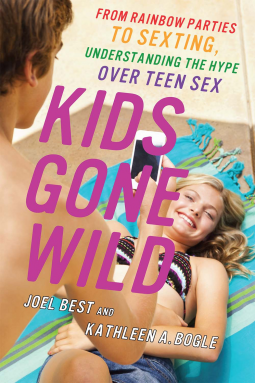 The Blurb
To hear mainstream media sources tell it, the sex lives of modern teenagers outpace even the smuttiest of cable television shows. Teen girls “sext” explicit photos to boys they like; they wear “sex bracelets” that signify what sexual activities they have done, or will do; they team up with other girls at “rainbow parties” to perform sex acts on groups of willing teen boys; they form “pregnancy pacts” with their best girlfriends to all become teen mothers at the same time. From The Today Show, to CNN, to the New York Times, stories of these events have been featured widely in the media. But are most teenage—or younger—children really going to sex parties and having multiple sexual encounters in an orgy-like fashion?

Researchers say no—teen sex is actually not rampant and teen pregnancy is at low levels. But why do stories like these find such media traffic, exploiting parents’ worst fears? How do these rumors get started, and how do they travel around the country and even across the globe?

In Kids Gone Wild, best-selling authors Joel Best and Kathleen A. Bogle use these stories about the fears of the growing sexualization of childhood to explore what we know about contemporary legends and how both traditional media and the internet perpetuate these rumors while, at times, debating their authenticity. Best and Bogle describe the process by which such stories spread, trace how and to where they have moved, and track how they can morph as they travel from one medium to another. Ultimately, they find that our society’s view of kids raging out of control has drastic and unforeseen consequences, fueling the debate on sex education and affecting policy decisions on everything from the availability of the morning after pill to who is included on sex offender registries.

A surprising look at the truth behind the sensationalism in our culture, Kids Gone Wild is a much-needed wake-up call for a society determined to believe the worst about its young people.

Joel Best is Professor of Sociology & Criminal Justice at the University of Delaware. He has published more than twenty books on social problems and deviance, most notably Damned Lies and Statistics.
The Review
﻿
What can I say? I found this book repetitive, based largely around disproven urban myths and generally exploiting sensationalised headlines to grab attention.

I'm sure there is a market for books aimed at parents around what is the 'normal' sexual activity for a teen (although why any parent would want to scare themselves half to death is beyond me) but Kids Gone Wild discussing sex bracelets and rainbow parties...I'm sorry, but these are not what you as Mums and Dads need to be worried about.  If as a parent you teach them about safe sex and self respect, you are doing it right.  This book refers to media bringing activities like sexting to the fore, yet that is exactly what this is doing under the guise of '(s)experts educating parents'.

Personally, I cannot think of anyone I would recommend this to, unless they were writing a thesis on the subject of teens sexual activity.