I am absolutely delighted to be today's stop on Katy Cannon's blog tour for her new release Secrets, Schemes and Sewing Machines.  This was a lovely read, a fun romance aimed at the teen market, and I'm thrilled to be able to share my review today. 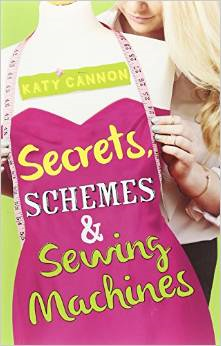 Secrets, Schemes and Sewing Machines is the companion novel to Katy Cannon's delicious teen read, Love, Lies and Lemon Pies. Grace had a plan for this year - and it didn't involve learning to sew. But when her world is turned upside down by a family secret, everything changes. Grace's family is in need of patching up and she's trying to focus on what really matters. But when new boy Connor appears on the scene, it doesn't make things any easier. She's desperate to prove to him that she's not a drama queen - but why is what Connor thinks so important?

Katy Cannon is a hot new voice in Young Adult fiction, writing contemporary romance that is perfect for fans of Sarah Dessen and Louise Rennison.

Firstly, although Secrets, Schemes and Sewing Machines is marketed as a 'companion novel' and it's obvious throughout the book that events in Katy Cannon's previous release are being alluded to, it can definitely be enjoyed as a stand alone.  I'd not read Love, Lies and Lemon Pies (but I definitely will be!) and I didn't feel remotely short-changed or as though I was missing out on anything I needed to know to appreciate the story.

And the story- it was so sweet!  Katy Cannon has created a humorous, romantic story much like the ones I enjoyed as a teenager.  That's not to say it's in any way dated- it's fresh, contemporary and believable- but it is more a 'will they/won't they', with tensions and fall outs between the characters than some of the other releases out there right now.

Drama-mad protagonist Grace is having a tough time adjusting to changes at home.  She hasn't got the drive to work hard at anything at the moment, not even turning up at the auditions for the school production of Much Ado About Nothing.  But she wants that lead role and in a bid to win over her drama teacher, Grace offers to be the wardrobe manager for the production.  There's just one problem- she can't really sew.

Grace sets about learning the skills she needs to pull this off, but infuriating-yet-gorgeous Connor is a distraction...plus, he knows she's doing this for her own gain not the good of the drama club.  What follows is a typical love/hate relationship, although I have to admit I was rooting for Grace and Connor from the start. Grace is stubborn and a bit of a princess at times, Connor can be a know-all and thinks he is better than everyone else. I liked that they had these minor flaws.  Neither of them are perfect and they can both be argumentative and at times unpleasant, but as the story progresses it becomes apparent that both characters are finding it hard to adapt to changes within their respective families.  They have more in common than they'd like to think...

This book brought back many happy memories of school drama productions and all the shenanigans that went with them.  I'm not the target audience by any means, but I found myself turning the pages and wanting to know what happened next with their families, the production and of course Grace and Connor's relationship.

And as a bonus for anyone inspired to become a little bit more crafty (in the best possible way) there are sewing projects throughout the book.  From simple hearts to t-shirt dresses and aprons, if you have an inclination towards the creative, you will be in your element.

I'm sure Secrets, Schemes and Sewing Machines will appeal to readers in their early teens, especially fans of romance.  It is available now, just in time for Valentine's Day.

With thanks to the publisher for providing me with a copy of this book in return for my honest opinion.

You can join in the fun on twitter using the hashtag #Grace4Connor
Posted by Katey Lovell at 03:00