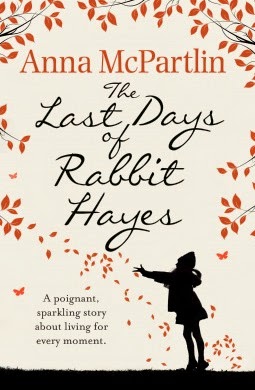 Rabbit Hayes loves her life, ordinary as it is, and the extraordinary people in it.

She loves her spirited daughter, Juliet; her colourful, unruly family; the only man in her big heart, Johnny Faye.

But it turns out the world has other plans for Rabbit, and she’s OK with that. Because she has plans for the world too, and only a handful of days left to make them happen.

Here is a truth that won’t be forgotten: this is a story about laughing through life’s surprises and finding the joy in every moment.

I've not read any of Anna McPartlin's previous novels before, but have heard really positive things from other bloggers. However, The Last Days of Rabbit Hayes seems to have really catapulted Anna McPartlin to the next level- the novel has been selected as a Richard and Judy Bookclub choice, which has thrust this book to centre stage.  And I can see why.  It's perfect book group fodder with its delicate subject matter.

I must admit I was a bit worried before reading this one.  A book about a mother dying of cancer didn't sound the most uplifting, and as someone who lost a parent at a young age I wondered if Rabbit's daughter Juliet's story might hit a bit too close to home.  I needn't have worried.  I'm not going to say it wasn't touching, and emotive, and downright painful to read in places.  But Anna McPartlin walks the delicate line between humour and heartfelt like a tightrope walker carefully balancing on a high wire.  Just when it starts to get a bit maudlin there's a one liner which will bring a smile to your face, and as you think you're enjoying the romantic elements of the story or getting to know the characters in more depth- WHAM- you're thrown back into turmoil.  It's a cliché much used, but this is a rollercoaster ride of a tale.

One of the major themes in The Last Days of Rabbit Hayes is motherhood.  Rabbit doesn't want to die leaving her adolescent daughter.  She's angry about all the milestones she'll miss out on seeing.  And she worries about who'll be the best guardian for her only child when she's gone.  On the other hand we're shown motherhood through the eyes of Rabbit's own mother, a feisty, determined, potty-mouthed woman who refuses to believe there is no cure for her daughter.  It is a reminder that motherhood is a lifelong journey, one for which we cannot truly prepare.  This aspect of the book is probably the one which will stay with me the most, especially the out and out desperation and helplessness felt by both the mothers.

The flashbacks to Rabbit's happy youth helping out with sound engineering for her brother's band were welcome relief from the terminal illness story in the present day, and also serve to  give the reader a deeper insight into the characters and their backstory.  The young romance is tender and true, believable and relatable.

It had me hooked from the get-go.  Highly recommended.
With thanks to the publisher for providing me with a galley copy of this book in return for an honest review.

The Last Days of Rabbit Hayes is out now in paperback, published by Transworld.
Posted by Katey Lovell at 10:46