A Kiss in the Dark- Lisa Fox 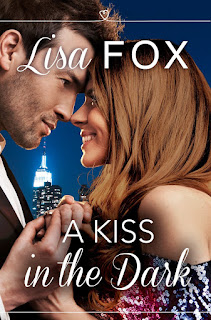 
A bad boy can make a girl feel so good.

Grace’s attraction to her new web designer, amateur boxer and all-around playboy, Ryan Granger, is off the charts. But the bad boy of programming is not someone she needs to get entangled with. She’s got too many responsibilities and no time for games. She has deadlines to meet and a sick father to care for. Ryan is tempting, but being with him is completely unrealistic. Still, a girl can fantasize, right?

Ryan wants Grace badly, but while he’s building her website, they have to keep things strictly professional. Thankfully, walking her home during a city-wide blackout is on his own time and whatever happens in the dark doesn’t count. He’s falling hard for Grace and he is a man used to winning. The only problem is, he’s got to convince her that he’s worthy of her trust.

This was my first Lisa Fox book, although I've had her previous two releases One Kiss and Her Perfect Lips on my kindle for a while now.  It's nothing personal why I haven't read them, I've just been so snowed under with review copies that I've not had chance to read many of my own purchases lately.  However, after reading A Kiss in the Dark I don't think they'll be languishing in my 'Books to read' folder for much longer!

Firstly, I was glad to read a novella.  Sometimes life gets a bit hectic, and at times like that shorter reads are my go-to.  This past week was busy for me as I was away at my best friend's wedding, plus the summer is always busy at my day job with end of year records to be produced and new children visiting the pre-school, but I get restless if I've not got a book on the go.  To be able to pick up a story which gets going straight away and carries on at a fast pace is perfect for me for this time of year.  Lisa Fox did this brilliantly, so that's one massive tick to start off with!

I'll admit, I wasn't sure the plot was going to be my sort of thing.  Whilst I've read and enjoyed books with an alpha male 'hero', I'm more naturally drawn to the geeks and misfits.  From the blurb, Ryan sounded like a bit of a lad.  Could I care enough about him to want to find out what happens between him and Grace?

I needn't have worried, because although boxer Ryan has a playboy past, we're shown how Grace softens him.  I loved the practical ways he showed her how much he cared- a real reminder that romance can be walking someone home or being there for them when things get tough.  It was the everyday gestures rather than the hearts and flowers which made him appeal to me.  That's not to say he's perfect, because there were times where his laddish ways made me want to scream!  But I did develop a soft spot for him, despite his flaws.

Grace is a writer who struggles to find time to complete her novel around family commitments (I think all writers can empathise with that!) .  She comes across as very 'normal', and almost dull in her regimented lifestyle.  As more is revealed about the nature of her fathers illness I began to see why she behaved as she did, and could see the struggles between her commitment to her Dad and her longing to get to know Ryan better.

I loved how the protagonist in Grace's own novel gained a love interest based on Ryan! In fact, I'd quite like to read that book myself, after all, mystery + romance = intrigue!  Possible spin off, Lisa Fox?!

Overall, I thought A Kiss in the Dark worked well as a short, snappy romantic fix.  If you're looking for a holiday read for when you're lazing in the sun, or something to keep you entertained when the kids are at the soft play centre over the six week holidays, this could be just what you're looking for.  My only complaint is that I want to know what happens next!  More!

A Kiss in the Dark is out now, published by HarperImpulse.

With thanks to the publisher who provided me with a copy of this book in return for my honest opinion.

You can also read my recent Q and A with Lisa Fox here.
Show More
Show Less