It's that time again- Waiting on Wednesday, the meme created by Breaking the Spine where bloggers share their excitement for forthcoming releases!
Today I'm shouting about Giovanna Fletcher's summer release Dream a Little Dream.  Last year I devoured You're The One That I Want and Billy and Me- both were engaging, romantic reads that made me fall just a little bit in love with Giovanna Fletcher's writing.  Her summer release sounds like a perfect summer novel for whiling away the days, and I'm likely to be reading this as soon as my preorder flashes up on my kindle!
Even the cover is beautifully summery and cheery! 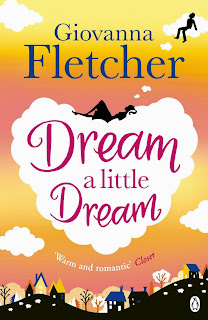 The new gorgeously romantic novel from bestselling author of Billy and Me and You're the One That I Want, Giovanna Fletcher.

Sarah is doing just fine. Sure she's been single for the last five years, and has to spend an uncomfortable amount of time around her ex-boyfriend, his perfect new girlfriend and all their mutual friends. And yes, her job as a PA to one of the most disgusting men in London is mind-numbingly tedious and her career is a constant disappointment to her mother. But it's really okay. She's happy (ish).

But it's not surprising that when Sarah starts dreaming about a handsome stranger, she begins to look forward to falling asleep every night. Reality isn't nearly as exciting. That is until her dream-stranger makes an unexpected real-life appearance, leaving Sarah questioning everything she thought she wanted.

Because no one ever really finds the person of their dreams... do they?

Dream a little Dream is released on June 18th 2015, published by Penguin.