Ann Troup talks about the inspirations behind The Lost Child

I'm pleased to be able to welcome author Ann Troup to Books with Bunny today! I've noticed her recent release The Lost Child catching the eye of bloggers and couldn't wait to find out a bit more about what inspired the story. 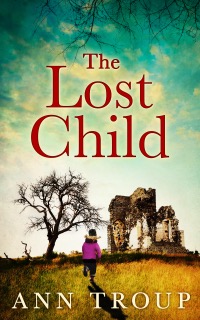 
First of all I’d like to thank Kate for inviting me onto her blog today, it’s always such a privilege to be asked to talk all things books.


So, I thought I would let you in on a few of the ‘true’ stories that inspired some of the scenes in The Lost Child.


In chapter one we are introduced to Elaine, who has an accident with her mother’s ashes and inadvertently allows them to blow into the face of unsuspecting teenager, Brodie. This incident is based on something that did indeed happen to me. Some years ago my lovely mother in law died and as she had loved the countryside my husband, his uncle and aunt and I decided that we would scatter her ashes in her favourite spot.  Off we went up into the Quantock hills with Phil resting peacefully in her urn. Once a suitable spot had been selected my husband, with great ceremony and gravity, began to scatter her ashes – it was a lovely moment, very solemn and dignified. Until the wind got up…within moments I was covered from head to foot with the remains of my mother in law. She was everywhere, billowing around like a sandstorm and landing wherever she could. She was a lovely woman, liked to laugh and was always a free spirit and very sociable. However I’m not sure that she ever anticipated that she would end up being carried around in my coat pockets! I can only imagine how much of my mother in law found their way all over Somerset and Devon, but she would have loved the experience and would have found the whole thing hilarious. I still have that coat, and still suspect bits of her remain, suffice it to say it’s not a garment that I wear anymore…


Hallow’s End doesn’t exist in real life, however Meadowfoot and Hallow’s Cottage do, though I have changed the names. I was lucky enough to come from a large family and as a child still had a few Great Aunts still with me. Two of these had been ‘in service’ for all of their working lives, both with the same family in a small stately home near to the town where I grew up. Aunt Alice was a housekeeper and retired to a nice, modern little bungalow, but Aunty Babs retired to the most beautiful little cottage. I spent many a happy hour in that cottage and it’s abundant garden. Those memories were the model for the two cottages which feature in The Lost Child, and I am sure there are elements of Aunty Babs in Miriam’s kindly character. Aunt Alice however was not the model for Esther – Alice was equally terrifying, but nowhere near as mean.


Finally the setting of Hallow’s Court is very real though again the name has been changed. Some years ago I was fortunate enough to work for an organisation that was based in an old stately home. The owner had rented it out for years, and at one time it had been used as a school. Not many people get the chance to roam freely in a house that has 138 rooms and which is a real slice of history. Whilst I was there I would frequently get lost just trying to find my way back from the cavernous kitchens. On one occasion, when staying overnight I took the wrong staircase and ended up in the cellars – let’s just say it was quite an experience and I have rarely been so scared in my life! It took me two hours to find my way out and I was glad to never make the same mistake again. My favourite parts of the house were the roof tops, only the Georgians and the Victorians could have made such a mundane part of a building such exciting terrain. On quiet days, I would take my lunch up there and sit amongst the chimney pots indulging my childhood memories of Mary Poppins and The Water babies. They don’t build houses like that anymore, and I’m not surprised – the heating bill alone was in excess of £30,000 a year. But it was bliss, and an experience I will always treasure.

The Lost Child is out now, published by Carina.