I'm a bit late getting around to posting this YALC round-up.  After a long, long day on Saturday I headed off to Scarborough for a few days with my family so blogging took a backseat for a while.  But I'm back with a vengeance now and excited to share all my photos and news with you!
*
It was just before 6am when my alarm went off.  TOO EARLY, but necessary in order to get the train from Sheffield down to London to head to Olympia for day two of the Young Adult Literature Convention (YALC).  Having missed out on 2014, I was full of both nerves and excitement about going.  Workshops, panel events, the agent area, signings, plus of course the multitude of stands from a whole host of YA publishers...I couldn't wait to get there.
Arriving at Olympia's overground station, I was already hot, sticky and exhausted.  And once inside, it was even warmer- the humidity made my hair unenviably frizzy and I was so thankful I'd had the foresight to pack a can of Impulse!  So these photos- especially as the day wore on- don't show me in my best light!
I started off exploring the stalls, grabbing freebie bookmarks, badges and sample chapters and perusing the books on offer.  And the tote bags...honestly, if you want to double/triple/quadruple your tote bag collection, you just need to go to YALC.  Publishers are literally thrusting them at you.  It's amazing.
It was as I was browsing the Hot Key Books stall that I stumbled across my first author of the day.  Robin Stevens, creator of Wells and Wong, was stood right next to me and I very excitedly introduced myself-having spoken on twitter many times it was great to be able to see her in the flesh and have a quick chat before each of us went back to snaffling books!﻿
I bought a copy of Keris Stainton's next release Counting Stars (publication day is September 3rd, so to say I was chuffed to bits with my purchase is an understatement), turned to decide where to head next and ended up almost falling over Keris as she was stood right behind me.  Having recently taken part in the Writing YA course that Keris runs online, it was fabulous to give her a real hug as a thank you and get my book signed.  Liz Kessler was also there, telling us how she got to the event on a horse (not really- she rode a bike, but her mime of cycling was a bit ambiguous...) and we were debating where my twitter handle @katey5678 came from.  It was suggested I was a Steps fan, which was then misheard as being a sex fan, which left Keris wondering what a 5678 could involve...
I quickly got Alice Osman to sign my copy of Solitaire before scooting off to my first panel of the day, Being a Girl, where Malorie Blackman, Holly Smale, CJ Daughtry, Laura Dockrill and Hayley Long were talking feminism with Anna James.  I loved this discussion, especially how Holly spoke of books being able to be subtly feminist and that Laura said she wrote real girls because she knows real girls.
It also struck a chord when CJ Daughtry said some men never read books by women, and when Holly pointed out many words used to describe fiction by women, such as 'light' and 'fluffy' actually mean 'insubstantial' or 'of little weight'- thought provoking stuff!  The time flew by and I could have happily listened to them debating and sharing their experiences of being women writers and creating female characters for much longer.
As I tweeted a few comments from the Being A Girl panel I noticed James Dawson- yes, the James Dawson I fawn over like crazy (see my Waiting on Wednesday for All of the Above if you need proof) - was also tweeting comments.  After the panel I saw him heading out and then made a very crap attempt at a joke which I'm now cringing over...I can only apologise profusely and say I was starstruck! James was heading off to get some lunch, but did say he'd be at the Hot Key stand later, so with that in mind I headed to the Writing YALC workshop led by Anna Mckerrow.  Anna put us into groups, and using flyers, comments people had made about YALC and freebie promo materials we created a piece of writing about the event.  Taking a less than serious approach, our group morphed the text from a flyer advertising a dystopian novel with the joy of finally meeting favourite authors to create this masterpiece... 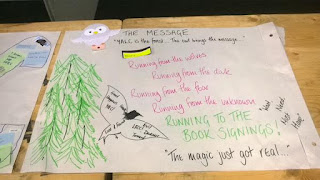 One of the highlights of this workshop was meeting the lovely Blondie Camps -such a sweetheart!
Embarrassed by my earlier fangirlling, I skulked back to Hot Key Books (yes, they are one of my favourite YA publishers, in case you hadn't guessed!) to get my copy of Cruel Summer signed by James Dawson and he very sweetly wrote 'Thank you for all your support'-I can't have made TOO much of a fool out of myself.  I was delighted to get a taster sample of All of the Above (publication date September 3rd)- having read that twice already I'm itching to get my hands on the full book- I have a feeling it could be his best novel yet.


The next panel I went to was Carrie Hope Fletcher's YALC Book Club, which had a very different feel to the Being A Girl talk.  Malorie Blackman, Holly Smale and Samantha Shannon, along with host Carrie, chatted openly about both reading and writing.  It was interesting to hear that Holly had always wanted to be a writer but had it drummed into her that 'people like us don't do jobs like that' and Carrie noted how no one ever tells you 'you could be a writer' when considering careers at school.  Both Holly and Malorie said they make an effort to visit schools as often as possible to show how writers are normal people, and also that they too fangirl over authors- Carrie said she was fangirlling at being amongst the authors she was with, Shannon admitted crying when she met Margaret Atwood, and Malorie said the first time she met Philippa Pearce she got tongue tied.
After this panel I got books signed by Carrie (another fangirl moment as I'm a huge fan- I saw her in Les Miserables back in April and when I read All I Know Now I found it packed with reminders of how I want to live my life).  She's just as cute in real life as she is in her vlogs and has this wonderful ability to put everyone at ease.  When I asked if her hand was hurting from all the signing, she said it was her face that ached from smiling so much!


I then braved the lower floor where the London Film and Comic Convention was happening because there was no way I was missing out on seeing Judy Blume in conversation with Patrick Ness!  This was a really enjoyable 45 minutes, especially as Patrick Ness seemed to be as big a fan of Judy as the rest of us!  I loved how he said 'No one is ever going to be as important to you as the people you meet as a teenager'- it absolutely says why Judy Blume is so revered by so many. It's hard to believe that Forever is forty this year, and Ness marvelled about how candid it is- having recently reread it (read my thoughts here) I could only nod in agreement.  I'm still planning my Judy Blume week on here and I'm extra excited for it following on from YALC.
After the panel I was fortunate enough to meet Judy and have a conversation about sanitary towels as she signed my copy of Are You There, God?  It's Me, Margaret.  This book had a huge impact on me as a teen, and talking about it with the author was mindblowing!  The version I first read back in 1990 still had Margaret experimenting using sanitary belts, whereas the version I have now has been updated to her placing a sanitary towel in her knickers to see how it feels- in terms of nostalgia, even though the belts were before my time I was sad they'd been changed, but Judy said when the UK publisher suggested it be modernised to pads she agreed outright.
Before heading home I was honoured to meet both the previous Children's Laureate Malorie Blackman and her successor Chris Riddell.  It was wonderful to be able to tell Malorie how her much-told story of 82 rejections prior to publication have kept me writing and that when she followed me on twitter I squealed!  Chris was fabulous too, and after he ran out of art paper he happily doodled in my notepad whilst revealing he enjoyed drawing on different types of paper.  It was brilliant to be able to look at his sketchbook too- I'm still thinking of a wonderful 'Chasing Cars' illustration in it that Chris had done to match the lyrics of the Snow Patrol song...I want it as a poster, it was perfection.


Before heading home with my bookish loot I had a quick meeting with fellow blogger Faye, and when I finally arrived home at just before midnight I was seriously in need of my bed.  Every part of me ached with exhaustion, however, I wouldn't have swapped it for the world.  YALC 2015 was a wonderful experience and I can't wait for next year and what it'll bring!
Posted by Katey Lovell at 13:00