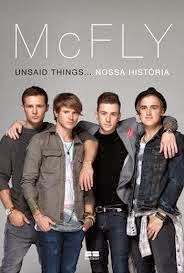 You lot have realised I am a bit of a fangirl by now, right?  Well, I am particularly nuts about One Direction, Take That and McFly, and in preparation for the McBusted appearance on The Jonathan Ross Show on Saturday night I read Unsaid Things.  It's been on my shelf for a while, but I had so many review copies to get through that it's been sat there, but I decided enough was enough-the fangirl in me won out over the reviewer in me and I read it in less than 24 hours.
It's fair to say that McFly/McBusted fans will get the most enjoyment out of this book, but anyone who has an interest in music and/or 'celebrity' (urgh) will learn a lot from this book.  The level of honesty from the boys is what makes this stand out from other biographies out there.  Between them they've been through mental health issues, addiction, and a LOT of women (Danny Jones, I'm particularly looking at you as I type this last bit).  They've also had a ridiculous amount of hits all over the world and have survived ten years at the top of their field.  They write songs for other artists.  They produce music.  They've done (and won) reality TV shows.  Tom is a youtube sensation.  They've even been played in space for crying out loud.

The boys take it in turns to tell the McFly story throughout Unsaid Things which makes for a pacey read and I defy anyone not to laugh as they read it.  Fans have always known they were exceptionally funny and this book just proves it.  Honestly, for a band that is made up of four very different guys (I want to say boys, but they are men now...so I'll stick with guys as a happy medium) they are all hugely entertaining-different enough to have their own identities but similar enough to share the same daft humour and wordplay.

I was close to tears at numerous points whilst reading.  Each member has gone through their own difficult times and the pride that I get as a fan seeing how genuinely happy they appear to be at the moment is immense.  On a personal level I was especially touched by Tom's descriptions of depression.  This is something I have gone through, and will probably always be going through, myself and his descriptions of the feelings he experienced really resonated.  The 'alien at the window' is something I can understand- my own depression and anxiety is worse at night- and the fear of bed because of the emotions you know are going to haunt you is something I can empathise with completely.

Reading Unsaid Things has made me even more excited for the McBusted tour and I cannot wait to be at the Sheffield gig on 19th May jumping around like a loon.

And Danny, for what it's worth I can forgive you your playboy antics.  Even though I wish I had been part of them ;)

Unsaid Things is out now, published by Bantam Press.