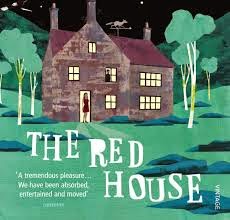 Before I start I must admit to not being a huge fan of Haddon's highly acclaimed The Curious Incident of the Dog in the Night-time. I could appreciate it as well written,  insightful and empathetic, yet I just didn't really enjoy it.

When The Red House was selected as the May read for my book group I wasn't sure it'd be my cup of tea.  The cover was gloomy and foreboding for starters, and my headspace hasn't been all that fantastic in recent months.  I didn't think I was up to coping with a depressing read (a Google search suggests that other editions of the book have a lighter cover- I wonder if owning one of those instead might have changed my perception of the book and therefore what I expected from it?).

However, The Red House isn't actually a depressing read.  Set around the Wales/England border (my old stomping ground!) it follows one week of a holiday.  It is an intense snapshot into family life where characters young and old wrestle with  the challenges of living- bereavement, marriage, sexuality, faith...Haddon certainly doesn't shy away from issues which other authors might be afraid to tackle for fear of offending.  But this is one of his greatest skills as a writer, his ability to explore and probe without preaching.

There was no main character, and personally I didn't like that.  I wanted to be able to get my teeth into them (not literally, I'm not a cannibal) and felt that wasn't possible.  Daisy in particular, a teenager discovering Christianity alongside her burgeoning attraction to another female, interested me.  In some ways I felt short changed as she would have made a brilliant lead character-I want a follow up with just her story to see what happens to her next! (As an aside, you can read the letter I wrote to Daisy here ).

In some ways not much happens in The Red House.  There is no concrete ending, no happily ever after-this is not a spoiler, any book which follows just one week will naturally end before the story does.  Being honest, I can't say I enjoyed it.  It is well written and experimental without being out and out irritating (thinking of other experimental writers here who have used techniques that as a reader I found unbearable- Ali Smith's 'start in the middle of a sentence' in The Accidental for one), and I cared enough about a few of the characters to want to read on.  I also found it interesting to see how the relationships between the characters developed over the course of the week, and how some days were eventful; others more mundane.

This book walks the fine line between despair and hope.  And the hope was what kept me reading.  We can all benefit from a bit more of that in our lives.

The Red House is out now, published by Vintage.
Posted by Katey Lovell at 14:44