Who is Tom Ditto? -Danny Wallace 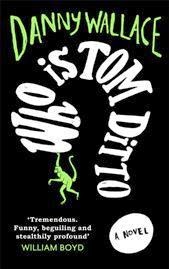 I've read and enjoyed all Danny Wallace's non-fiction books, but this is the first of his fictional works that I've tried.  I'll be honest, I wasn't sure what to expect, even after reading the blurb...

The Blurb
We join the action just as our 'hero' Tom, (early thirties, reads the 'news' on the radio) finds out that his girlfriend has NOT left him.

I have not left you. But I am gone.

Please carry on as normal.

And what if she's never coming back??

Trying to work out what's happening to his confusing life, Tom tries to track Hayley down. In doing so, he stumbles across a strange and eccentric group of people with an irregular and highly-addictive hobby.

Next, he's being followed, but he's not sure by whom. And then he also almost loses his job at the radio station in the now infamous 'Jam Nazi' episode, which of course, you know about.

Above all, Tom is trying to work out who everyone is.

Because who is Hayley? Who is this new girl following him around the supermarket?

And who, for that matter, is TOM DITTO?

The Review
It's fair to say I was intrigued enough by the haphazard nature of the blurb to want to read Who is Tom Ditto? It sounded like a fun, quirky read and I'm always on the look out for something a little bit different to the norm.

The whole 'following' thing was slightly freaky-I have actually found myself looking over my shoulder as I walk around Morrison's, for fear that someone is going to buy the same teabags and own brand Custard Creams as me- but made for an interesting and unusual plot.  The whole premise of CC was uncomfortable and yet strangely alluring.  I guess we all have that nosiness deep within us where we model ourselves on ours choices and actions.

Who is Tom Ditto? reads very much like Danny Wallace's other books-fluid in style, conversational text, observational humour and quick quips.  It is a very accessible book, and I can imagine it appealing to those who don't read a lot as well as avid readers.  The characters, especially Pia, had me longing to know more, infact I think Pia deserves another book all of her own-she is fantastically barmy.  I think I actually want to be her.

I really love the whole 'Britishness' of this book, I can't see that it would work if it were set anywhere else.  There are eccentricities which add depth to the story, along with a serious issue of relationship break ups (or not), yet overwhelmingly this is a story of humour in the midst of despair.

This is a fresh, well written novel with hidden depths.  Ideal for fans of Mike Gayle and William Boyd.

Who is Tom Ditto? is out now.

With thanks to the publisher for providing me with a copy in return for an honest review.