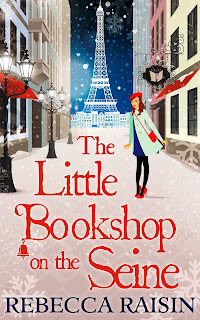 Bookshop owner Sarah Smith has been offered the opportunity to exchange bookshops with her new Parisian friend for 6 months! And saying yes is a no-brainer – after all, what kind of a romantic would turn down a trip to Paris…for Christmas?

Even if it does mean leaving the irresistible Ridge Warner behind, Sarah’s sure she’s in for the holiday of a lifetime – complete with all the books she can read!

But will her dream of a Parisian Happily-Ever-After come true? Or will Sarah realise that the dream of a Christmas fairytale in the city of love isn’t quite as rosy in reality…


My email pinged and I dashed over to see who it was from. That’s how exciting my life was sans Ridge, an email was enough to make me almost run, and that was saying a lot. I only ran if chocolate was involved, and even then it was more a fast walk.


Sophie, a dear Parisian friend. She owned Once Upon a Time, a famous bookshop by the bank of the Seine. We’d become confidantes since connecting on my book blog a while back, and shared our joys and sorrows about bookshop life. She was charming and sweet, and adored books as much as me, believing them to be portable magic, and a balm for souls.


I clicked open the email and read.


I cannot stay one more day in Paris. You see, Manu has not so much broken my heart, rather pulled it out of my chest and stomped on it. The days are interminable and I can’t catch my breath. He walks past the bookshop, as though nothing is amiss. I have a proposal for you. Please call me as soon as you can.


Poor Sophie. I’d heard all about her grand love affair with a dashing twenty-something man, who frequented her bookshop, and quoted famous poets. It’d been a whirlwind romance, but she often worried he cast an appraising eye over other women. Even when she clutched his hand, and walked along the cobbled streets of Paris, he’d dart an admiring glance at any woman swishing past.


I shot off a quick reply, telling her to Skype me now, if she was able. Within seconds my computer flashed with an incoming call.


Her face appeared on the screen, her chestnut-colored hair in an elegant chignon, her lips dusted rosy pink. If she was in the throes of heartache, you’d never know it by looking at her. The French had a way of always looking poised and together, no matter what was happening in their complex lives.


“Darling,” she said, giving me a nod. “He’s a lothario, a Casanova, a…” She grappled for another moniker as her voice broke. “He’s dating the girl who owns the shop next door!” Her eyes smoldered, but her face remained stoic.


I gasped, “Which girl? The one from the florist?”


Sophie shook her head. “The other side, the girl from the fromagerie.” She grimaced. I’d heard so much about the people in or around Sophie’s life that it was easy to call her neighbors to mind. “Giselle?” I said, incredulous. “Wasn’t she engaged – I thought the wedding was any day now?”


Sophie’s eyes widened. “She’s broken off her engagement, and has announced it to the world that my Manu has proposed and now they are about to set up house and to try immediately for children –”


My hand flew to my mouth. “Children! He wouldn’t do that, surely!” Sophie was late-forties, and had gently broached the subject of having a baby with Manu, but he’d said simply: absolutely not, he didn’t want children.


The doorbell of her shop pinged, Sophie’s face pinched and she leaned closer to the screen, lowering her voice. “A customer…” She forced a bright smile, turned her head and spoke in rapid-fire French to whoever stood just off-screen. “So,” she continued quietly. “The entire neighborhood are whispering behind their hands about the love triangle, and unfortunately for me, I’m the laughing stock. The older woman, who was deceived by a younger man.”


I wished I could lean through the monitor and hug her. While she was an expert at keeping her features neutral, she couldn’t stop the glassiness of her eyes when tears threatened. My heart broke that Manu would treat her so callously. She’d trusted him, and loved him unreservedly. “No one is laughing at you, I promise,” I said. “They’ll be talking about Manu, if anyone, and saying how he’s made a huge mistake.”


“No, no.” A bitter laugh escaped her. “I look like a fool. I simply cannot handle when he cavorts through the streets with her, darting glances in my bookshop, like they hope I’ll see them. It’s too cruel.” Sophie held up a hand, and turned to a voice. She said au revoir to the customer and spun to face me, but within a second or two, the bell sounded again. “I have a proposal for you, and I want you to really consider it.” She raised her eyebrows. “Or at least hear me out before you say no.” Her gaze burned into mine as I racked my brain with what it could be, and came up short. Sophie waved to customers, and pivoted her screen further away.


“Well?” I said with a nervous giggle. “What exactly are you proposing?”


She blew out a breath, and then smiled. “A bookshop exchange. You come and run Once Upon a Time, and I’ll take over the Bookshop on the Corner.”


I gasped, my jaw dropping.


Sophie continued, her calm belied by the slight quake in her hand as she gesticulated. “You’ve always said how much you yearned to visit the city of love – here’s your chance, my dear friend. After our language lessons, you’re more than capable of speaking enough French to get by.” Sophie’s words spilled out in a desperate rush, her earlier calm vanishing. “You’d save me so much heartache. I want to be in a place where no one knows me, and there’s no chance for love, ever again.”


I tried to hide my smile at that remark. I’d told Sophie in the past how bereft of single men Ashford was, and how my love life had been almost non-existent until Ridge strolled into town.


“Sophie, I want to help you, but I’m barely hanging on to the bookshop as is…” I stalled for time, running a hand through my hair, my bangs too long, shielding the tops of my eyebrows. How could it work? How would we run each other’s businesses, the financial side, the logistics? I also had an online shop, and I sourced hard-to-find books – how would Sophie continue that?


My mind boggled with the details, not to mention the fact that leaving my books would be akin to leaving a child behind. I loved my bookshop as if it were a living thing, an unconditional best friend, who was always there for me. Besides, I’d never ventured too far from Ashford let alone boarded a plane – it just couldn’t happen.


“Please,” Sophie said, a real heartache in her tone. “Think about it. We can work out the finer details and I’ll make it worth your while. Besides, you know I’m good with numbers, I can whip your sales into shape.” Her eyes clouded with tears. “I have to leave, Sarah. You’re my only chance. Christmas in Paris is on your bucket list…”


My bucket list. A hastily compiled scrappy piece of paper filled with things I thought I’d never do. Christmas in Paris – snow dusting the bare trees on the Left Bank, the sparkling fairy lights along the Boulevard Saint-Germain. Santa’s village in the Latin Quarter. The many Christmas markets to stroll through, rugged up with thick scarves and gloves, Ridge by my side, as I hunted out treasures. I’d spent many a day curled up in my own shop, flicking through memoirs, or travel guides about Paris, dreaming about the impossible…one day.


Sophie continued: “If you knew how I suffered here, my darling. It’s not only Manu, it’s everything. All of a sudden, I can’t do it all any more. It’s like someone has pulled the plug, and I’m empty.” Her eyes scrunched closed as she fought tears.


While Sophie’s predicament was different to mine, she was in a funk, just like me. Perhaps a new outlook, a new place would mend both our lives. Her idea of whipping my sales into shape was laughable though, she had no real clue how tiny Ashford was.


“Exchange bookshops…” I said, the idea taking shape. Could I just up and leave? What about my friends, my life, my book babies? My fear of change? And Ridge, what would he have to say about it? But my life…it was missing something. Could this be the answer?


Paris. The city of love. Full of rich literary history.


A little bookshop on the bank of the Seine. Could there be anything sweeter?


With a thud, a book fell to the floor beside me, dust motes dancing above it like glitter. I craned my neck to see what it was.


Was that a sign? Did my books want me to go?

The Little Bookshop on the Seine

The Little Antique Shop under the Eiffel Tower

The Little Perfume Shop off the Champs-Élysées

The Bookshop on the Corner
Secrets at the Maple Syrup Farm


is a bibliophile. This love of books morphed into the desire to write them. She’s been widely published in various short-story anthologies, and in fiction magazines, and is now focusing on writing romance. The only downfall about writing about gorgeous men who have brains as well as brawn is falling in love with them – just as well they’re fictional. Rebecca aims to write characters you can see yourself being friends with. People with big hearts who care about relationships, and, most importantly, believe in true, once-in-a-lifetime love.