Just the Way You Are- Lynsey James 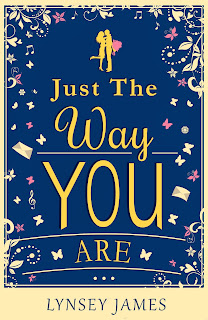 Dear Ava, How do you start writing a letter to someone, six years after breaking their heart?


Ava is unlucky in love as well as in life. The new office bitch has landed the dating column Ava wanted, and she can't remember the last time she had a second date. It's a good thing she has best friends Max and Gwen to pick up the pieces.
Deep down, Ava knows the reason why one date never turns into two - she's in love with someone else. Someone she's never even met.
It all started six years ago, with a letter from a secret admirer, Mr Writer... but then they suddenly stopped and Ava was heartbroken.
Now the letters have started again and Ava knows it could mean winning back the dating column at work. This time she's determined to unmask Mr Writer... and find out once and for all if he's Mr Right or Mr Very Definitely Wrong!
The Review

I've 'known' Lynsey on twitter for a few years now through the book blogger community and was thrilled to hear she'd been offered a book deal with Carina!  She'd mentioned her writing before and I loved the idea of a mysterious admirer sending old-fashioned love letters - after all, you can't get much more romantic than that.

Just the Way You Are is Ava's story. There's her work life, where she's desperate to write a barn-storming article to win the dating column from her arch-rival.  Her tight friendships with Gwen and Max, people she hopes will always have her back.  The relationship she builds with Ivy, a lady she strikes up a bond with and decides to make it her mission to reunite her with lost love Leo.  And of course, the letters from Mr Writer...

That's the one part of the book I was less keen on, the secret admirer.  The idea itself was great, but I just didn't feel there were enough contenders for the role of Mr Writer.  There wasn't any mystery for me and I'd expected to be wondering who was wooing Ava for far longer than I actually was.  This book is marketed as a romantic puzzle but for me the subplots were far more appealing, mainly because unlike the Mr Writer storyline, I genuinely wasn't sure how they'd play out.  Personally, I was more drawn to Ivy and Leo's story than Ava's and I'd have loved them to be the central characters in this book.  Their story had such bitter-sweet history and with Ava determined to reunite them I was willing a happy ending for this older couple.  Ivy was definitely my favourite character - wise, but with a sense of fun.

I'm looking forward to seeing what Lynsey does next when her second novel, The Broken Hearts Book Club is released next week.

Just the Way You Are is out now, published by Carina UK.

With thanks to the publisher who provided me with a copy of this book in return for my honest opinion.
Posted by Katey Lovell at 04:00