Tales of the City - Armistead Maupin 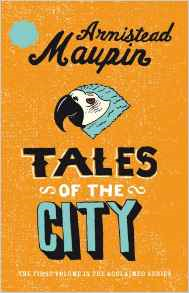 A few months ago I put out a request for books set in San Francisco, and one book (or series of books) got mentioned over and over again.  Armistead Maupin's Tales of the City had somehow passed me by - I'm really not sure how.  But as soon as I started reading this first instalment, I knew I was going to be hooked.

The 'tales' belong to a wide and diverse cast.  Mary Ann is new to San Francisco, moving into lodgings at 28 Barbary Lane.  She's quiet and uncontroversial, very different to the other tennants living in the house.  Mona seems unsure of what she wants from life and relies on sedatives to get through the day, Michael is gay, skint and looking for a good man (I loved him, especially in the scene with the jockey shorts in the bar), Brian sleeps with any woman he can find and landlady Anna Madrigal grows marijuana in the garden... plus there's an array of supporting characters each with their own secrets.  Their lives are carefully and cleverly interwoven to create one world from what is essentially a series of short stories.

I liked how the scenes were snappy - most just a few pages long - and there was a lot of dialogue which added to the already fast pace.  The dry humour and cutting remarks reminded me of a soap opera and have retained relevance 37 years after they were first written.  Maupin lived in the San Francisco he was writing about and it shows, there's a realism in even the most outlandish of situations and that made me care about the characters and their plight.

This book is older than I am, and I imagine it was shocking when originally published (and probably still would be now to some readers!)  Race, sexuality, drugs and infidelity are key to the plot and talked about openly, nothing is off limits.  It was refreshing to read a book where every character is going through their own problems yet isn't overwhelmingly depressing.  Somehow there's an uplifting air to Tales of the City despite the unfulfilled lives of the majority of the cast and to me that's conveyed through the genuinely touching where the characters reach out to each other.

The only negatives for me were that it took a while to get my head around so many different stories and I had to google some of the seventies American references to fully understand the story.  But despite that I found myself so drawn to this wonderful world that I went straight onto the next book in the series.  I need to know what happens next!

I've not read anything quite like this before.  And I loved it.

Tales of the City is out now, published by Transworld.
Posted by Katey Lovell at 01:30