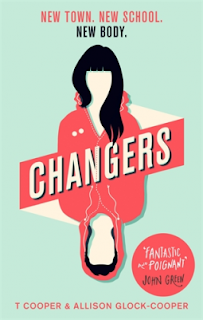 Ethan Miller is about to start high school in a brand-new town. He's finally sporting a haircut he doesn't hate, has grown two inches since middle school, and can't wait to try out for the soccer team. At last, everything is looking up in life.

Until the next morning. When Ethan awakens as a girl.

Welcome to the world of Changers.

I don't read much in the way of sci-fi and fantasy but Changers sounded like such an ingenious concept that I couldn't resist giving it a try.  And I'm so glad I did.  I've not read anything like this before.

Ethan is a normal guy about to start a new school.  Then when he wakes up the next morning, he finds he's no longer Ethan, he's Drew.  And what's more, Drew's a girl.

Drew's parents explain that Ethan was born as a 'Changer', and will become four different people before getting to choose which he wants to be for life.  However, although there are many changers out there, society mustn't know.  It's a bit like how in Harry Potter the wizarding world are right under the muggle's noses but they're none the wiser of the subcommunity within their midst. Drew's not helped by how her parents, particularly Dad who was also a changer, seem to have no sympathy for the enormity of the situation.  This was the bit I didn't really understand - why weren't they more empathetic to the fact she's changed school, city, gender, and to some degree personality if they have experience of it?

In many ways, not much happens.  Drew finds out about Changers, going along to secret meetings with other teens going through the same process.  Drew develops a crush on one of her fellow Changers, something that's strictly forbidden.  Drew is confused about her relationship with her best friend Audrey.  She realises there are people out there who are suspicious about Changers and their intentions.

It's difficult to summarise as although there are some elements which fit with sexuality/gender, because of the way the story is it's difficult to really draw on those themes.  Drew isn't sure who she is or how she should feel - male/female, straight/gay - but it's almost irrelevant because she'll be changing again before long, and will most likely be and feel completely different in her next incarnation.

This is the first book in a series and the snappy dialogue and interesting concept has made me interested enough to continue reading on.  A lot of the themes such as friendship and lust are those found in more mainstream YA novels, and this probably added to the appeal of Changers for me, as someone who doesn't regularly read this type of book.  I'm looking forward to finding out who Drew changes into next when the second book is released this summer.

Changers - Drew is out now, published by Atom (Little, Brown).