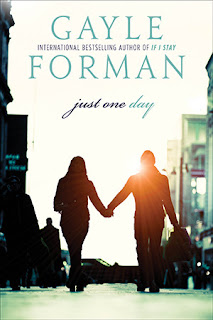 Allyson Healey's life is exactly like her suitcase—packed, planned, ordered. Then on the last day of her three-week post-graduation European tour, she meets Willem. A free-spirited, roving actor, Willem is everything she’s not, and when he invites her to abandon her plans and come to Paris with him, Allyson says yes. This uncharacteristic decision leads to a day of risk and romance, liberation and intimacy: 24 hours that will transform Allyson’s life.

A book about love, heartbreak, travel, identity, and the “accidents” of fate, Just One Day shows us how sometimes in order to get found, you first have to get lost. . . and how often the people we are seeking are much closer than we know.

The first in a sweepingly romantic duet of novels. Willem’s story—Just One Year—is coming soon!

I bought this book from the incredible Books of Wonder in New York City on the recommendation of my friend Anne.  Anne's a librarian who loves YA, so being let lose in a children's bookshop with her was a dangerous but amazing experience.  It was like having my own personal shopper.

What sold the book to me was the contemporary romance element - in my opinion there's just not enough modern YA out there that focuses primarily on the connection between two people.  But the connection between American Allyson, who's on an organised tour of Europe before heading off to study medicine at university and Dutch Willem, who's part of an unconventional group of Shakespearean actors, literally sizzles from the start.  As the pair head off on an impromptu twenty-four hour visit to Paris, the ultimate city of love, Allyson discovers that maybe no one is ever just one person...including herself.

There's more to Just One Day than love or lust, although that element of the novel was written in a way that evokes so much emotion that it wouldn't have mattered to me if it was 300+ pages of purely love-riddled angst.  There's travel, the absolute beauty of exploring new places for the first time with both fear and wonder.  There's self-discovery, and the realisation that as humans it's in our very nature to change and develop and grow.  There's friendship, both old and new, and how those relationships can either blossom into something special or wither away.

I suppose, in its more simple terms, Just One Day is a coming of age novel.  But with some of the most beautiful cities in the world as a backdrop, Forman's beautiful storytelling and a love story that had me in bits, for me that sells it short.

I'm sure that come December this will be in my reads of the year and can barely wait to get my hands on Willem's story in the second book in the series, Just One Year.

Just One Day is out now, published in the UK by Definitions.
Posted by Katey Lovell at 01:00