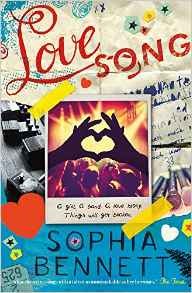 Seventeen-year-old Nina doesn't get why everyone's obsessed with The Point - but when she averts a backstage disaster and is offered a job on tour, she can hardly turn it down. She quickly learns that being with the hottest band on the planet isn't as easy as it looks: behind the scenes, the boys are on the verge of splitting up. Tasked with keeping an eye on four gorgeous but spoiled rock stars, Nina's determined to stick it out - and not fall for any of them ...

There are some book reviews that I dread writing.  This is one of them.  I just know that it'll be impossible to convey everything I loved about this book in a few short paragraphs, because as young adult fiction goes, Love Song is pretty darn perfect.

Nina is an ordinary seventeen year old - well, sort of.  All around her people are going crazy for hot band The Point, but she doesn't see the attraction.  In fact, she only goes to their gig to keep her sister, who's a big fan, company.  However, when by a twist of fate she's offered an opportunity to join them on tour she sees a different side to each of the boys and they're no longer celebrities staring out of a magazine but real people with real problems...

It's gently humorous and touching and I adored Nina - she's such a relatable character.  Although she's in an extraordinary situation she comes across as a normal, grounded young woman discovering who she is and what she wants from life, which sets this book apart from some of the other reads out there with a celebrity backdrop.  It was well written and engaging, and I genuinely couldn't stop reading it.  I actually fell asleep with it in my hand - that's how unwilling I was to put it down.

However, what I loved most about this book was the way it unflinchingly examined what it means to be a fan to the point of what some people might class as 'obsession'.  As a self-confessed fangirl I absolutely related to the hoards of fans who bonded over a shared love the band.  Sophia Bennett captured the essence of what it is to love a band, and more importantly be part of a fandom, perfectly.  I actually shared certain passages from this book on social media to try and explain that "Yes!  This is how it feels to be a fan!" to all those who have mocked and accused and been dismissive of what it means to be a part of a community of people who love the same thing.  Part of me hoped they'd see it and understand.  But there's a selfish part of me that didn't want them to, because it really feels that Love Song is for us die-hards, for those who've pressed F5 until their fingertips have gone numb on ticket release day, or those who've queued for eight hours for the doors to a gig to open.

Love Song is out now, published by Chicken House books.
Posted by Katey Lovell at 21:01