I think of myself as a pretty diverse reader.  I read fiction and non-fiction aplenty across a variety of genres and with differing target audiences.  I read poetry, fan fiction and flash fiction.  And occasionally I've read graphic novels - over recent years I've reread some of the Tintin stories and reviewed a graphic novel adaptation of Peter Pan last year.

But I'd never tried manga before, despite its popularity.  I can't say why really, other than that a lot of the titles bloggers raved about didn't hold any appeal for me.  I either didn't like the style of the art, or it looked like it was too far towards fantasy/gore for my taste.

Last week I had a bit of spare time after meeting friends at Meadowhall and so naturally I drifted to the bookshop (actually I drifted to a few - Waterstone's and WH Smith).  It was in the latter that I browsed the surprisingly large manga section and found a book I couldn't resist taking away with me.  That book was the first omnibus volume of Princess Jellyfish.  I absolutely fell head over heels in love with Tsukimi and her friends and it's encouraged me to try more manga, mainly josei (aimed at ladies) or shojo/shoujo (aimed at teen girls).

Here's the manga I read in April. 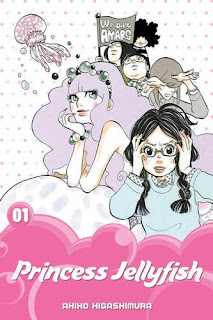 The Blurb
Tsukimi Kurashita has a strange fascination with jellyfish. She's loved them from a young age and has carried that love with her to her new life in the big city of Tokyo.

There, she resides in Amamizukan, a safe-haven for girl geeks who regularly gush over a range of things from trains to Japanese dolls. However, a chance meeting at a pet shop has Tsukimi crossing paths with one of the things that the residents of Amamizukan have been desperately trying to avoid - a fashionable socialite!

But there's much more to this woman than her trendy clothes. Their odd encounter is only the beginning of a new and unexpected path for Tsukimi and her friends.
The Review
Fangirls and romance are an irresistible combination and Princess Jellyfish absolutely nails it.  From the moment I was introduced to Tsukimi I knew this was a young woman I could relate to.  Her and her friends the Amars are socially awkward and devote their lives to their passions in trains, manga and kimonos.  They're disinterested in fashion and no real desire to fit in.  So when a beautiful woman bursts into their life and shows no sign of taking the hint to leave, everything changes.
Princess Jellyfish was a perfect introduction to manga.  Firstly, the art is absolutely gorgeous.  When I finished reading I started again so I could really appreciate it in its own right.  And it was also really, really helpful that the characters were visually different.  I wasn't ever wondering which character was which because they all had individual styles.  The story was compelling - familiar enough because it followed the trope of the misfit, yet with a new twist.  It was humorous and light hearted yet still dealt with issues such as societal expectations, politics (on an accessible level!) and grief.  I'd urge anyone keen to try manga to start with Princess Jellyfish - I can't wait for volume 2 to be released in June!
Princess Jellyfish is published by Kodansha Comics.  It is available in ebook and paperback form.
Hot Gimmick vol.1 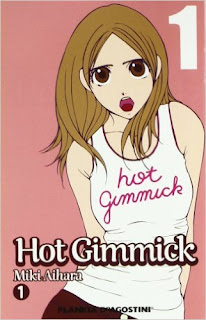 The Blurb
﻿
In company-owned rabbit-hutch apartments live tenants who can't afford to live anywhere else, and the apartment complex in which high-school girl Hatsumi Narita lives is ruled over by the rumour mongering, self-righteous Mrs. Tachibana. Get on Tachibana's bad side, and life becomes hell. When Hatsumi has to buy a pregnancy test because her popular sister Akane is late, Mrs. Tachibana's son, Ryoki, who used to bully Hatsumi as a kid, promises not to tell the world about Hatsumi's secret if she becomes his slave. Suddenly Azusa, Hatsumi's protector in their youth, reappears to save her again! He's moving back into the neighbourhood! Despite the budding romance between Hatsumi and Azusa, Ryoki has control over her through the secret that could ruin the lives of everyone in Hatsumi's family, and he hasn't forgotten who his slave is!
The Review
I picked up Hot Gimmick at the library because I was drawn to the cover.  I loved the style of the art especially the wide-eyed characters and the simplicity in the strong lines.  The cover is typical of the style throughout this manga.
The actual plot of Hot Gimmick made uncomfortable reading at times as Ryoki's bullying of nervous Hatsumi is sexual - he's pressurising her to try and make her do things she doesn't want to do.  This didn't sit well with me at all and at one point I almost put it down because I found it so disturbing - probably worse than in other fictions that cover similar topics because it's visually played out through the artwork.
However, I did keep reading because I cared enough to know what would happen next and I hoped that with the return of Hatsumi's friend Azusa she'd become more confident and stop giving in to Ryoki's blackmailing.
I was so irate with this book for a number of reasons but I will go and get volume 2 from the library because I'm curious enough to find out what happens next.
Hot Gimmick is published by Viz Media in ebook and paperback format.
Kiss Him, Not Me! vol.1 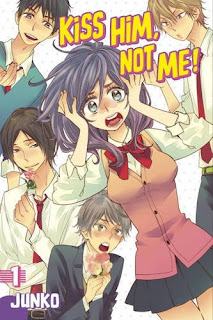 The Blurb
﻿
Kae is a secret fujoshi (female manga/anime nerd) who spends all day fantasizing about her male classmates making out with… each other.

However, her fervent passion for manga and anime causes an accident that comes with surprising results.

The once homely and overweight fangirl has become an overwhelmingly cute girl who now turns heads everywhere she goes. With her new looks, Kae has caught the attention of a group of handsome boys who all want to date her. But in the end Kae is still a fujoshi at heart, and rather than receive kisses from them, she would get much more enjoyment out of seeing those boys make out with each other.
The Review
Kiss Him, Not Me! is one of the most popular shojo manga series at the moment.  When Kae's favourite anime character dies, she's bereft - so bereft that she goes from plain and overweight into the hottest girl around in a fortnight.  It soon becomes the typical ugly duckling/'fat girl loses weight and becomes desirable' story when four boys are suddenly interested in Kae and are willing to overlook her obsession with manga to get her to choose them over the others.
It's an entertaining read and I can see why it's done so well, I just wish the story didn't revolve around Kae's weight/transformation.  On a personal level, that touched a nerve.
The other thing I found slightly confusing was how the male characters looked similar - it made it hard at times to differentiate between them.  There were a few times I had to break my stride to refer back to previous boxes to work out which boy was which.
However, I'll definitely be reading volume 2 and just wish this volume had been a double/omnibus!
Kiss Him, Not Me! is published by Kodansha in ebook and paperback format.
That was my month in manga!
﻿
Posted by Katey Lovell at 12:49