I am a fan of Will Young.  I know it isn't cool like being a fan of the Stones or Bob Dylan, but I can't help it.  From when I first saw him on Pop Idol I knew that this was someone who interested me, someone with a fabulous voice, someone who was strong-willed and passionate, someone who was funny.  And I have been a fan ever since.

Those first perceptions of Will were right, and this is shown throughout 'Funny Peculiar'. 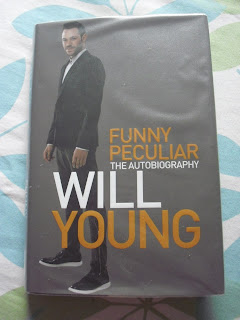 However, there is much more to Will than this.  'Funny Peculiar' is an autobiography that is honest and insightful.  From his public schooling to his appearances in the stage show of 'Caberet', Will's life and career is explored in an entertaining, dry-humoured way.

For me, the most interesting aspects of the book were when Will opened up his heart about his ongoing battle with depression.  As someone who also suffers depression I could really relate to the candid descriptions of the dark days (weeks, months...).

Will also speaks in some depth about his sexuality, and the difficulties he felt as a teenager to admit to himself and friends and family that he was gay.

I would have loved to have read more about Will's time touring and recording, but can appreciate that 'Funny Peculiar' is perhaps more accessible to a wider spectrum of people for focusing primarily on emotions rather than Will's career.

And a quick final mention for the small line drawings-I found them entertaining and a few actually made me laugh out loud.  Genius.