The Perks of Being a Wallflower- Stephen Chbosky

I was given The Perks of Being a Wallflower for Christmas by my sister-in-law, Jill.  I'd asked for it specifically, mainly because the stir around the film adaptation had piqued my interest and I always try and read the book before watching the film in these situations.  Although I do try and avoid the film tie-in editions of books wherever possible- in my opinion having famous actors and actresses on the cover takes away the personality of a book.  The edition I have has a cover that is a beautiful representation of what to expect from the book-a scrap of paper from a journalists notepad covered in scrawling, sprawling script. 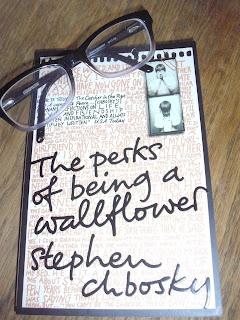 The Perks of Being a Wallflower is a coming of age novel.  It is built up through letters addressed to 'Dear friend' and follows Charlie through his freshman year.  I'm not normally a fan of coming of age stories.  I find they often lean towards pretentious.  This was different.  Chbosky has very cleverly written a novel that will appeal to teens and adults by referencing timeless aspects of youth culture that has and will continue to appeal to young people- The Rocky Horror Picture Show, The Beatles, The Smiths, Nirvana, On the Road, The Catcher in the Rye...

The charm of the book comes via Charlie, whose insightful observations of the world are endearing and thought provoking.  It reads almost like a free-write, testimony to Chbosky's readable style.

Charlie's letters explore unrequited love, bereavement, mental health, sexuality, drugs and abortion.  The difficult subject matter is beautifully explored, written with a reflective awareness that will stay with the reader long after the final page.