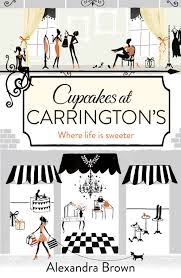 Georgie Hart loves her job--running the luxury handbag concession at Carrington's Department store in the pretty seaside town of Mulberry Bay, and treating herself (once too often!) to a red velvet cupcake with buttercream icing in Carrington's café.

But Georgie is thrown into disarray when Carrington's is plunged into a recession-busting makeover, cueing the arrival of femme fatale Maxine, who wields the axe in her immaculately-manicured hands.

It spells a recipe for disaster for Georgie and soon she is fighting not only for her job, but also for the attentions of her gorgeous boss, James. And when hot newcomer Tom arrives, who may or may not be the best thing since sliced bread, Georgie must decide where her loyalties really lie...

I do love books set in and around shops, which is pretty weird seeing as I'm not a particularly avid shopper myself.  There is something magical about an old fashioned department store though, how one moment you can be knee deep in toys and the next you're surrounded by a waft of pungent perfume that lingers for hours.  Alexandra Brown obviously feels that the department store is a special place too, and this introduction to the Carrington's series is a humorous, fast paced rom-com of a book.

Maxine is perfect as the woman you love to hate, and I was completely bowled over by beautiful Tom.  However, Cupcakes at Carrington's doesn't just rely on its big-hitters, some of the minor characters are also huge personalities which adds to the drama and high jinks.  However, there are some serious subjects tackled amongst the humour, particularly in relation to issues within Georgie's family which give the book an additional layer of depth.