Him and Me- Jack and Michael Whitehall 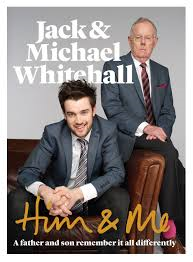 Him and Me is a book with a unique premise.  Actor/Comedian/TV show panellist Jack Whitehall and his showbiz agent father Michael reminisce about family holidays, school speech days and general, everyday life for a typically well-off, privately educated, Conservative-voting family.  Chapters are written by both Jack and Michael, with interjections in the form of side-notes from father and son which make entertaining banter.  The strapline 'A father and son remember it all differently' is pretty fair, as anyone who has ever been embarrassed by the actions of a member of their immediate family will be able to identify with some of the cringe-worthy anecdotes throughout.

Michael's namedropping of celebrities such as Nigel Havers and Mollie Sugden is second only to that of Tom Jones on The Voice, and is irritating after a point.  However, Jack provides a glossary of high profile actors of yesteryear to aid the understanding of young hipsters reading Him and Me, and I did enjoy the tales about Trevor McDonald, so I feel I can't be too negative about this.

There are the obligatory photographs of cheeky smiles (Jack) and inappropriately chosen baseball caps (Michael), along with amusing comic sketches by Jack, who turns out to be quite the artist (who knew?!)

Overall, I thought this was a clever concept for a book which mostly worked well.  There were times where I was chuckling aloud to myself (particularly about Jack's missed opportunity to play Harry Potter!), and I found the obvious closeness between the two of them added a depth that I wasn't expecting.  A humorous memoir which fans will love.

Him and Me is out now, published by Michael Joseph, an imprint of Penguin.

With thanks to the lovely Katya for providing me with a copy of this book in return for an honest review.
Posted by Katey Lovell at 17:29