Broadchurch: The Novel- Erin Kelly and Chris Chibnall REVIEW OF THE TASTER! 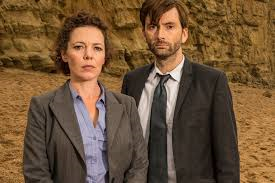 I, along with the majority of the UK, was completely hooked by Broadchurch in the spring of 2013.  Murder, mystery, suspense, small-town living and a strong sense of community, along with a cracking script and all star cast made the drama a must-see show.

When I heard there was to be a Broadchurch novel, co-written by screenwriter Chris Chibnall and crime author Erin Kelly I was delighted. The TV drama had been so wonderfully constructed, so highly visual and emotive, that I felt sure it would transfer well to the page.

I was fortunate enough to nab a taster of the Broadchurch novel from the lovely people at Sphere, and my appetite is now well and truly whetted.  It is well written, captivating and transported me to the seaside town hit by the ultimate tragedy-the death of a teen.  If there is anyone out there that didn't watch the TV drama, you absolutely must read the book.  If the taster is anything to go by it is true to the plot and promises to be just as gripping.  It has a lot to live up to in order to compare to the ITV show, but the rich text and highly descriptive style in the taster suggests it has the potential to rival the screenplay.  If you were a fan of Olivia Colman and David Tennant in the show, you will be able to hear their acidic tones flooding from the page as the plot unravels.  I cannot wait to read the rest.  Roll on August!

Broadchurch : The Novel is due for release on August 14th 2014, published by Sphere and is available for pre-order now.
Posted by Katey Lovell at 19:14