Regular readers of Books with Bunny will be aware that I have a bit of a love affair going on with Mirabelle Bevan.  Sara Sheridan's super sleuth is sharp, enigmatic and completely beguiling- I just love her.  The mysteries themselves are top drawer too, well written, historically accurate and not too grisly.  They are like the classical stories of the genre, driven by character and plot rather than the shock tactics and 'how vile and disturbed can I make this story?' style of some other modern day detective books. 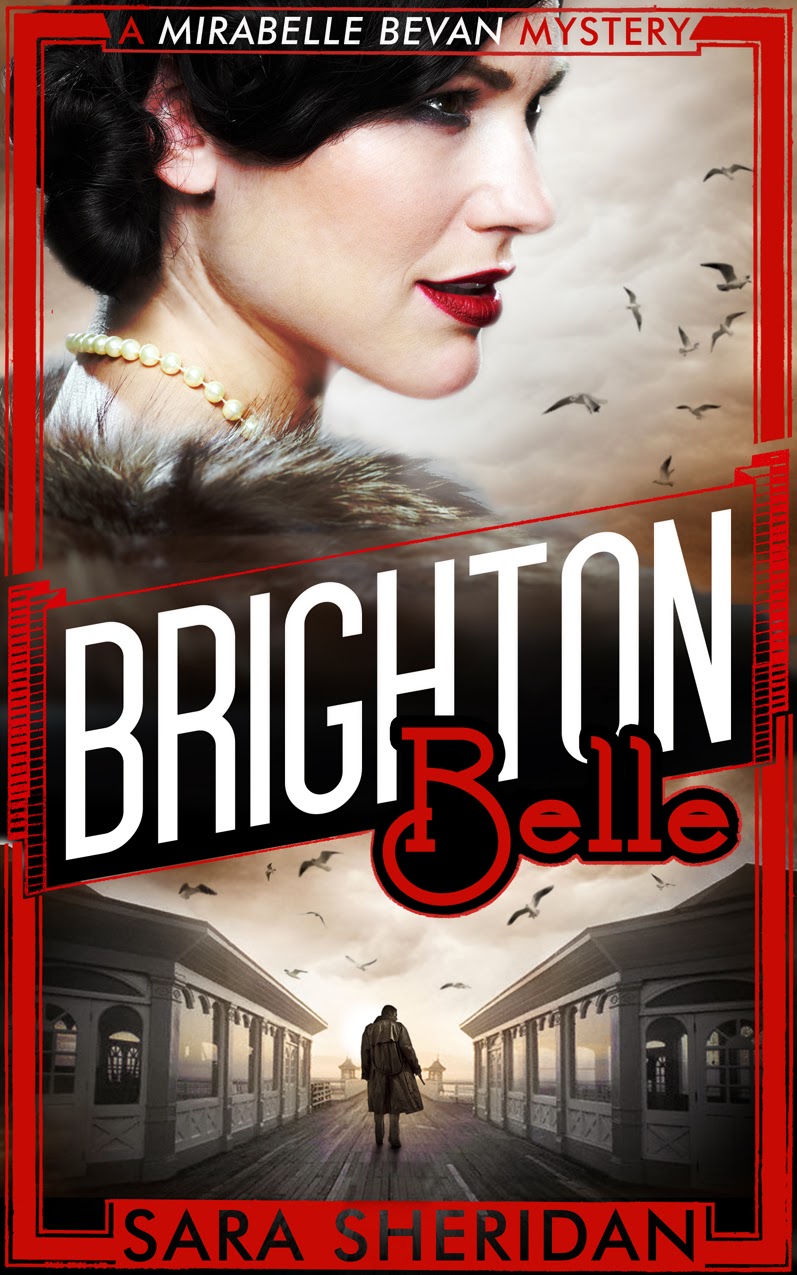 However, I must admit that the first thing that drew me to Brighton Belle was its delicious cover.  Mirabelle dominates the cover, her ruby red lips striking and alluring, her hair perfectly coiffured. The fur collar and pearl necklace set her out as being somewhat well-to-do, yet her smoky eyes seem to be taking in everything, dangerous and powerful.

It has the reference to the setting by showing Brighton's iconic pier, and the birds in flight represent freedom and escape.  The red trim is eye-catching and daring, and the overall vintage feel appealed to me (I'm a bit of a 1950s geek, truth be told).

Everything about this cover shouted out 'Buy me!  Buy me!', and buy it I did.  Maybe I'm the target audience for the Mirabelle books in every sense, but this cover gave me an accurate taste of what to expect from the books (indeed, the series too). 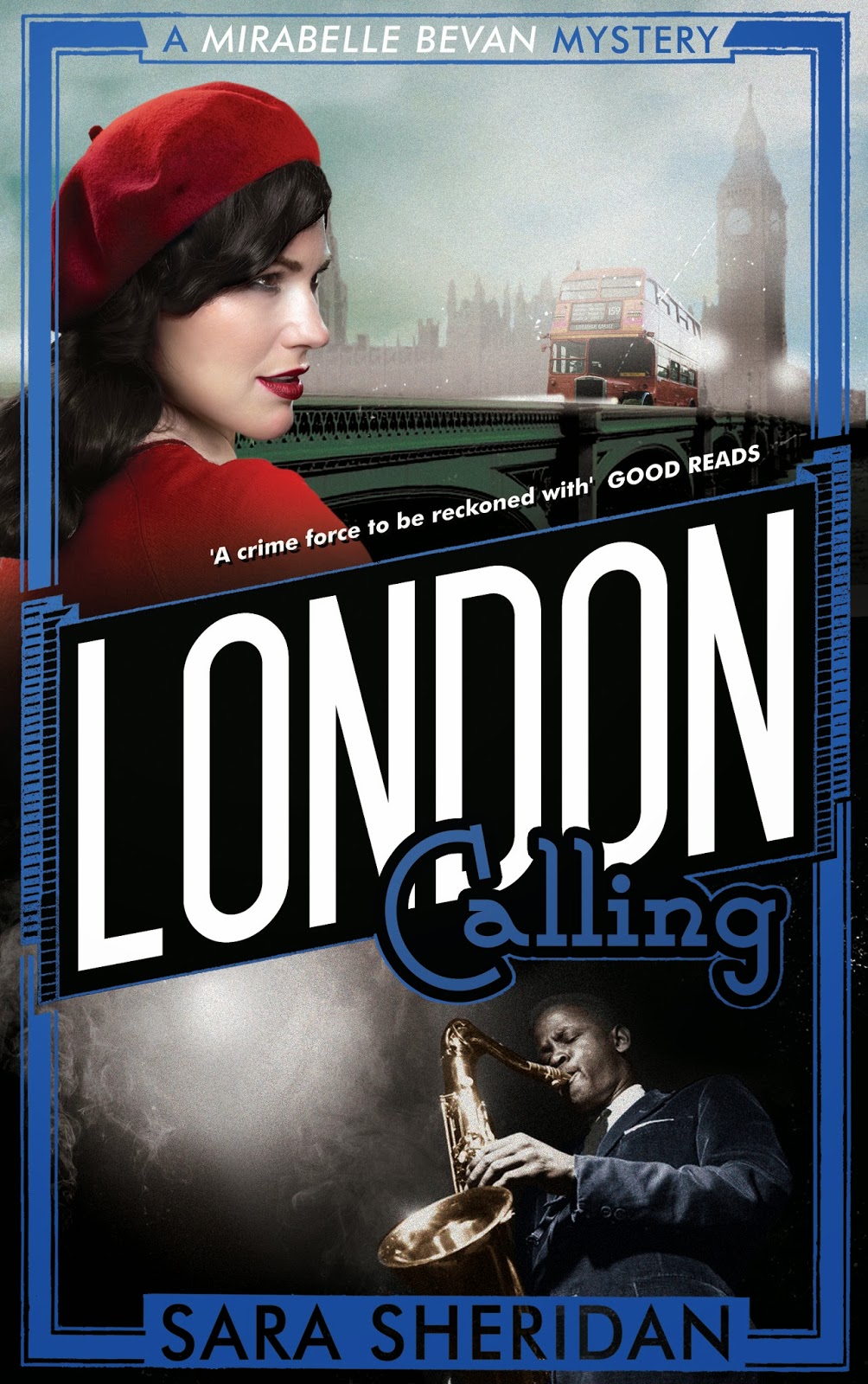 London Calling, the second book in the Mirabelle series, went with a cover that complimented Brighton Belle.  This time Mirabelle is shown in the shadows of the Houses of Parliament with the added detail of a London bus heading through the mist over the Thames.  The jazz saxophonist gives potential readers a flavour of the underground London music scene which dominates this mystery, and the cover very evidently suggests this is a book set in a bygone era.
Mirabelle is still wearing her trademark fire-engine red lipstick, this time accompanied by a red beret and jacket.  Mirabelle is colourful and vibrant in comparison to the rest of the cover which is dark and murky-she is clear whilst everything else seems to be hidden in a smoky haze.
The peacock blue trim is very vintage in feel and is beautifully in keeping with the essence of the Mirabelle mysteries.﻿ 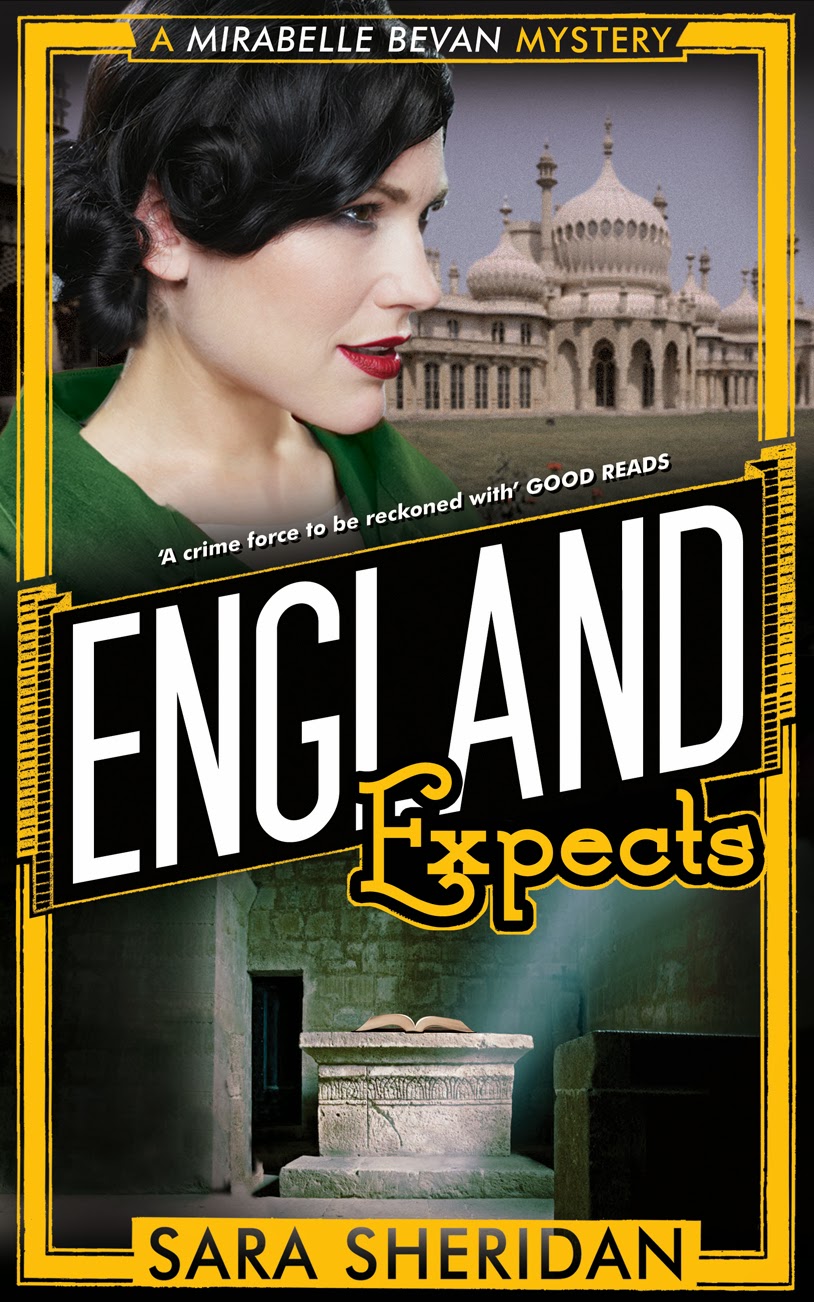 England Expects is the forthcoming Mirabelle mystery and I am so excited to be able to have a review copy of this book!  The fan girl in me knows no bounds and the cover is just as astoundingly beautiful as that of the two previous Mirabelle books.
Mirabelle hasn't changed much in appearance, her lipstick and smoky eyes still prominent features on her porcelain face.  Her dark hair is still immaculately groomed and brought out by her bottle green clothing.  The ornate turrets of Brighton Pavilion provide a stunning backdrop and the golden yellow trim is striking whilst still holding with the distinctive style of the Mirabelle covers.
England Expects promises to be another enthralling read.  It is released in hardback and ebook on Thursday 3rd April and is available for preorder at Amazon.co.uk
I was also fortunate enough to speak to Sara Sheridan about how much input she has into the beautiful cover art.  Here's what she had to say-
'In all my contracts I’ve always had the right to see the cover, but never I’ve had cover approval. With the Mirabelle books, I’ve had more input to them than ever before, though. My editor, Alison, is as obsessed with 1950s fashion as I am and we have long conversations about what Mirabelle will get to wear on each book (HAT OR NO HAT?). We debate her make up too (what we have ended up with is slightly too pearlised to be absolutely authentic for the 1950s - especially the early 1950s - but we ended up going with it because it looks better.) I love those conversations… I think Alison does too. And I also love the covers – I’ve seen people pick up the books on bookshop shelves because they’re drawn to them… it’s a special kind of story magic. In British Bulldog (next year’s book) Mirabelle goes to Paris and we’re already thinking Eiffel Tower or Arc de Triomphe. It will be a glorious debate!'
Something for me to look forward to in 2015!  If you are interested in finding out more about Sara Sheridan, you can read other Books with Bunny blog articles about her here or follow her on twitter, @sarasheridan.