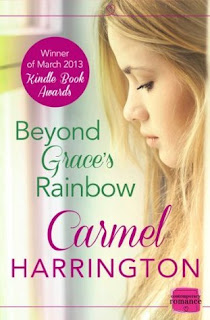 Beyond Grace’s Rainbow is the deeply emotional and poignant story of young single mother Grace Devlin. With a wonderful cast of supporting characters and plenty of charm, this will have you laughing and crying at the turn of a page.

Grace Devlin is a single mother living in Dublin.  Her former partner is a recovering alcoholic and hasn't been part of their son Jack's life.  However, now he's sober and back on the scene.  But things have changed.  Grace may still have the same close knit friendship group and a positive outlook on life, but she's just been diagnosed with cancer.

Grace needs a bone marrow donor if she's to be in with a chance of recovering, but she was adopted as a baby and her birth mother Catherine hasn't made contact.  In a desperate bid to prolong her life, Grace reaches out to Catherine, revealing her ill-health.  When they meet they get along well, but Grace doesn't understand why her birth mother won't share the details about her biological father when there's a chance he could save her life. It was this subplot that really had me hooked. I loved the secretive nature and especially enjoyed it when Grace's friends Tom and Gerry took it upon themselves to go undercover to find out more...

I'll admit, this wasn't always an easy book to read.  It deals with cancer, bereavement, adoption, addiction and other sensitive topics.  Really, it should be one of the most depressing books out there, judging on subject matter alone.  However, the book is built around Grace and her wonderful group of supportive friends.  I loved how they would genuinely do anything for each other.  They were a truly eclectic mix of characters with big personalities which only brought depth to their relationships.  I particularly had a soft spot for Abby and found her speed dating scenes cringeworthy-I wanted her to find a good, reliable man so much!

It's the gentle humour and rock-solid friendships that stop this book from being overwhelmingly heavy going even in the darkest moments, and my only negative is that there were a lot of exclamation marks throughout- not just in the dialogue but in the narrative too.  When reading I take great note of the intonation, but for me they came around too frequently and I felt some of the impact of the heavy scenes was lost as they often ended on a light note.

That said, by the time I got to the end of this book I was snivelling into a tissue.  The characters had been through so much and I honestly felt like I'd been through it with them.

I'm excited to read Carmel Harrington's second novel The Life You Left after reading this, because if the plot of Beyond Grace's Rainbow is anything to go by I'm in for a treat.  This woman knows how to tell a story!

Beyond Grace's Rainbow is out now, published by Harper Impulse.

With thanks to the author who provided me with a copy of this book in return for an unbiased review.