What Happens to Men when they Move to Manhattan- Jill Knapp 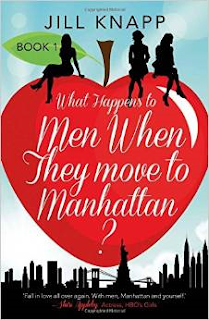 Life in the city gives 23 year old Amalia Hastings a ride she is not expecting. As she tries to find her way on the little island that never sleeps, she discovers she has a harder time navigating through life then she does the streets of Greenwich Village!

She thought she had everything she wanted – a new apartment in Manhattan, a first-rate education at NYU, a group of trusted friends and Nicholas, a boyfriend who she once believed was her soul-mate. But somehow, it isn’t enough.

Stumbling through her relationships, Amalia encounters Michael. An attractive classmate who quickly moves from being one of her close friends, to an inconsistent friend-with-benefits. After all, the only thing consistent about New York is its beauty.

Amalia is essentially torn between two men, and Michael is torn between two women. Her best friend Cassandra is being strung along by her “boyfriend”, Bryce, and even her friend Olivia is having a secret relationship!

After getting terribly lost searching for love in all the wrong places, Amalia finds herself asking – what happens to men when they move to Manhattan?!

It's no secret that I'm a big fan of romantic fiction, and an even bigger fan of New York City. When the two are combined I'm always excited to see what's in store, and when I heard about What Happens to Men when they Move to Manhattan I couldn't wait to get stuck in.

There's very definitely a Sex and the City type feel to this one!  Protagonist Amalia is one of the privileged girls, with a posh apartment, attractive boyfriend Nicholas and a group of stylish, well-to-do friends.  But then there's college mate Michael, throwing a spanner in the works...

At first I found her quite an irritating character, almost brattish.  But then she's a 23 year old trying to find her place in the world, so I cut her a bit of slack and although I didn't find her particularly likable, nor relatable, I felt I at least understood her.

When Amalia's dumped with no solid explanation, seeds of doubts about her future are sewn.  This is what made me warm to her slightly- when it was clear that although she had a lot of material goods and a seemingly perfect life, she actually still faced the same issues as many other girls her age- although she retained her strong attitude.

There's quite a lot of socialising and a fair few petty disagreements, which I suppose is true for people in their early twenties!  Perhaps I'm a bit too far removed from this scene now to relate to this culture, but I imagine for readers in their late teens and early twenties, or fans of NA generally, there might be more connection to the characters which would have perhaps enhanced my enjoyment.

That said, it's an easy book to read- I was surprised when I reached the end because I didn't feel I'd been reading for that long!  That's a credit to Jill Knapp's voice; her chatty flow made me zoom through the book even though there were times when the subject matter didn't grab me.

Overall, by the time I reached the final pages and Amalia had followed the path of self discovery, I cared enough about her to want to know what happens next- which is a good thing because What Happens to Men when they Move to Manhattan is the first in a series!  If you like your heroine's feisty, then this could be one for you.

What Happens to Men when they Move to Manhattan is available now in ebook and paperback formats, published by Harper Impulse.

With thanks to the publisher who provided me with a review copy of this book in return for my honest opinion.