Say It With Sequins: The Charleston- Georgia Hill 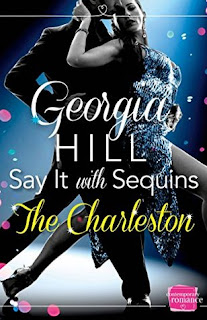 For fans of reality dance shows, this series is strictly irresistible!

Into the last stage of ‘Who Dares Dances’ blasts Meredith Denning, a tour de force! She’s a voluptuous, beautiful Oxford grad looking for a direction in life.

Merry is partnered with professional dancer Daniel, who is still nurturing feelings for a newly engaged Julia. Though it’s not long before these two take their incredible chemistry from ballroom… to bedroom!

With Daniel on her arm and the trophy within reach, Merry finds herself in danger of breaking the habit of a lifetime as she falls heavily for Daniel.

Find out how it all ends the final part of the flirty, fun and FAB-U-LOUS series, Say it with Sequins!

When I read the first Say It with Sequins book The Rumba back at the start of 2014, I fell in love.  Firstly, because there was going to be a romance series based around a dancing show- how brilliant a discovery that was for a Strictly addict!  But secondly, I came across a character I totally fell head over heels for- the gorgeous Welsh sweetheart Harri.  I'd enjoyed the plot, but found there were a lot of characters introduced in quick succession.

By the time the second book in the series came out (The Waltz) I was ready to be reacquainted to the characters.  Max and Lucy's 'will they/won't they' was another enjoyable read with a hunky hero to boot.

But it's The Charleston which finishes this series with a bang.  The doubts I'd had about surplus characters in the first two books were wiped away, with short cameos from those with big personalities (the judge who is obviously based on Craig Revel-Horwood for example- genius!) lightening the mood whilst we're also reunited with protagonists from previous books (yes, I mean the lovely Harri, who's preparing to tie the knot).

Merry, a failed comedian, is drafted into the show as a last minute replacement.  Feeling conscious of her height and weight and generally out of her depth, she's paired up with Daniel, the professional dancer who's still lusting after Julia, Harri's wife to be.  The couple work hard and Merry is the surprise favourite to win the show.  However, the show's vile producer Bob has thrown down the gauntlet by forcing the contestants to face their fears.  As Merry bravely tackles a long-held phobia Daniel's loving nature and strong moral standing are revealed.    I loved this moment!  It's the equivalent of when Clark Kent becomes Superman- my heart fluttered wildly and I wanted to cheer for his forceful belief in what's right.  What a hero!

Without wanting to reveal the nature of the plot too much because that's this book's strength, I can only say it's touching and swoonsome with plenty of humour.  Romantic, satirical and wonderfully written, this is the glitterball-worthy performance in the show that has been Say It With Sequins.  Fantastic!

The Charleston is out now (as both an individual title and as part of the Say it With Sequins complete series), published by Harper Impulse.

I read this book as part of the #HIReadathon 2015.  For more information, search the hashtag on Twitter or Facebook.