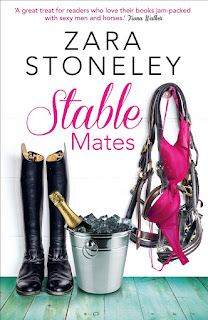 'A great treat for readers who love their books jam-packed with sexy men and horses.' Bestselling author Fiona Walker

Welcome to tranquil Tippermere, an idyllic village nestled deep in the Cheshire countryside. Home to lords and ladies, horsemen and farmers, and plenty of secrets and scandals…

Leaving a scumbag ex behind her, Lottie Brinkley has hotfooted it out of Spain and back home to the country in serious need of some flirtatious fun to soothe her aching heart.

Luckily for her she’s spoilt for choice with not one but three eligible bachelors offering a steamy romp in the hay! But faced with the attentions of roguish eventer Rory Steel, the smiling Irish eyes of hunky farrier Mick O’Neal, and mysterious newcomer Tom Strachan, how can she possibly choose?

When billionaire landowner Marcus James drops dead unexpectedly, his WAGish wife Amanda threatens to sell the heart of the village and sets her sights on Tom! It seems things are heating up for little Tippermere… both in and out of the saddle.

‘Fans of Fiona Walker will love this book’ – ThatThingSheReads

When I first started reading this I wasn't sure I was going to enjoy it.  That's nothing to do with Zara Stoneley's writing, which was entertaining from the off.  It's more that I'm not in the least bit interested in horses.  I can appreciate their beauty, but I've never been a rider.  When the other girls at school were begging for ponies, I begged for books. And I was slightly concerned that Stable Mates would have too strong a focus on riding for me to be able to enjoy it.

However, I needn't have worried. Although there are plenty of horsey scenes, you don't need equestrian knowledge to follow the plot, which focuses around life in the fictional village of Tippermere.  The large cast of characters are caricatures of country life- the old-money landowners, the wannabe WAGs, the 'outsider' who everyone has their suspicions about...and they're all a bit randy.  It's like Emmerdale, but with more money.

For the first half of the book I was a bit confused about everyone's role.  Reading it on kindle didn't help, because there was a character list at the front which I could have flicked back to if I had it in paperback format.  Plus everyone seemed to have a nickname as well as their given name, which took a bit of remembering!  However, once I stopped being hung up on who everyone was and just let myself become immersed in the mayhem, I enjoyed it much more.

I also felt the plot really developed as the book went on.  At first it seemed to be out and out sex, but then there's the rumours about why model Tom has suddenly appeared in the village and it had me wanting to know more.  There was also more romance as the story wore on which always wins me over.  The final scenes of the book were my favourite, there were revelations, celebrations and titillation!  I'd love to see this as a TV series, there's plenty of humour and drama that would lend itself to being adapted for television.

I can absolutely see why this has drawn comparisons to Jilly Cooper and Fiona Walker. Stable Mates is a fun romp for anyone who enjoys their fiction with a side order of quickies in the haybales!

Stable Mates is out now, published by Harper Impulse.

I read this book as part of the #HIReadathon 2015.  To find out more, follow the hashtag.