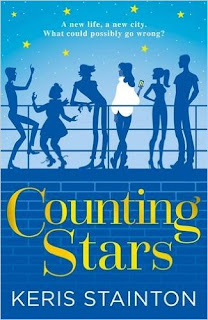 When eighteen-year-old Anna leaves school and moves to Liverpool, she feels like her life is finally beginning. She's landed her dream job at a theatre, and she's moving into an exciting (if not slightly run-down) houseshare on a buzzing street lined with shops, bars, and buskers. Best of all, her new flatmates are kind, welcoming and a lot of fun - what more could she ask for?

But her new life is also a little overwhelming. Anna's job quickly falls through, and then she realises that although her new friends are great, they're also a little mixed-up... and it's not long before Anna starts using her blog to talk about her experiences, from the hilarious to the ridiculous to the little-bit-scary. But when Anna spills a bigger secret than she can handle, suddenly the consequences are all too real. She'll have to prove she has the mettle to make it in the big city, or risk losing everything she thinks she wants.

I can't get enough of books about tight-knit friendship groups at the moment and newfound friendship is the basis for Counting Stars.  Anna excitedly leaves home to start afresh in Liverpool, and quickly settles into life in a shared house in the city centre.  Her housemates are her new best friends and she's open and honest with them about so many things- the fact the job she moved to Liverpool for has fallen through, that she's not used to drinking, that she's a virgin... but she doesn't mention her online alterego as vlogger Anna Sparks. As time goes on it seems harder to share this secret, but Anna can't stop vlogging, it's s deeply ingrained in her life.

I thought the characters in this one were brilliant; all likable and believable for their age group.  Sean, who's hung up on a boy called Charlie who doesn't know he exists. Alfie, the sensible and sensitive one who knows he doesn't want to follow in his father's footsteps as a moneygrabbing businessman.  Molly, who's unreliable and flighty and lives in the moment without fear for the consequences. And finally Nina, who's dropped out of performing arts college and is chambermaiding at a hotel, although her and bootycall Jack find themselves on the job rather than doing their job pretty regularly.  Each bring something different to the book and they all have their own storylines and subplots, which I felt added depth to the book.

There was always something happening which ensured there was never a dull moment, and as soon as one situation was resolved another challenge was laid down for the characters to overcome.  This did mean some parts felt a little bit hurried and I'd have gladly found out even more about the characters and their life and had a book double the length!  I was talking to my friend Laura at Blabbering About Books who said she'd have loved this to be a series, and I can understand what she means as it's so moreish and there's so much contained in the plot and subplots.  Ultimately, I think we both just longed for more!

This book took me back to the heady days soon after leaving home where freedom is both liberating and downright scary.  It's a challenging time and Counting Stars portrays that perfectly.  I can't say how much I loved it and I'm so glad I got my copy signed at YALC (you can read about that, and my meeting Keris here) as it's a definite 'keeper' for me.

Counting Stars is out today, published by Hot Key Books.