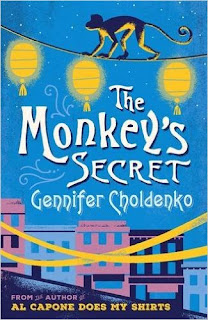 In a segregated town, a hidden boy, a courageous girl - and a mystery in desperate need of solving. San Francisco, 1900. Thirteen-year-old Lizzy Kennedy is not like the other girls in her town. She'd much rather be helping her doctor father with his patients than be stuck in frilly dresses and learn how to dance - but unfortunately for her, society (and her Aunt Hortense) has other ideas about what is 'proper' for a young lady. This includes not poking your nose in other's people's business - but then Jing, their beloved housekeeper, gets stuck in the Chinatown quarantine. Fear rules San Francisco - fear of the Chinese, and mostly fear of the plague rumours that circle them. Lizzie knows she has to help Jing, whatever the warnings. But what she doesn't expect to find is a strange boy hiding in Jing's room. The boy is called Noah. He says he's Jing's son - although Lizzie's never heard of him - and although he's escaped the quarantine, he can't risk leaving the house in case he gets rounded-up too. Lizzie wants to investigate, but it seems her questions only get people riled up. Is there really plague in San Francisco? What have the Chinese got to do with it? Just what or who is the mysterious 'monkey' - and what has his secret got to do with anything? Lizzie will have to use all of her courage, instinct and cleverness to unravel the mystery of the monkey's secret, save Jing, Noah and Chinatown - and maybe even her change her own destiny.

I've not read Gennifer Choldenko's previous books, and The Monkey's Secret is quite different to my usual choice of reading material.  However, I was drawn in by the bright cover art and when I realised it was set in San Francisco I knew I wanted to give it a whirl (it's one of the destinations I'm heading to on my trip to America later in the year).

The Monkey's Secret is a fictional story based around actual events in San Francisco at the turn of the twentieth century.  Doctor's daughter Lizzy overhears an adult conversation which appears to be spoken in code- why is everyone talking about a monkey?  After much digging, she discovers rumours that the plague is rife in the Chinatown region of the city and takes it upon herself to find out more.

Lizzy is a wonderful character- brave, clever and sharp as a tack.  She's determined and strong and refuses to let adults keep her in the dark.  Her tenacity is admirable and I am so pleased this book had a great female protagonist, particularly as it's set in the past.  Aunt Hortense was a formidable woman too, I could imagine her throwing the most withering of looks to those who dared to do anything she disagreed with.  This book will definitely appeal to the feminist reader due to the ballsy portrayal of the female characters.

There were times the pace was a bit slow for my taste, but I was interested enough in the story to keep turning the pages.  It was appealing to read a book set in a different time and place and the imagery Choldenko portrays, particularly within Chinatown, is magnificent.  The sense of mystery really comes across and whilst I was cheering Lizzy on, willing her to obtain the information she desperately longs for, I had my heart in my mouth at the end of the story.  There are a few chilling moments, that's for sure.

At the end of the book there's a timeline showing the actual dates of the events that inspired Choldenko and I definitely learnt a lot from this - I never even knew San Francisco had been affected by the plague.

If you're looking for a unique mystery with a feisty female lead, The Monkey's Secret is well worth a look.

The Monkey's Secret is out now, published by Hot Key Books.

With thanks to Hot Key Books who provided me with a copy of this book in return for my honest opinion.
Posted by Katey Lovell at 03:00