Today's guest on Books with Bunny is bestselling author Anouska Knight.  Her previous releases Since You've Been Gone and A Part of Me have received rave reviews, and her new release Letting You Go looks to hit the same dizzy heights.

Anouska's post introduces us to Alex, the protagonist in Letting You Go and explains why the author has a soft spot for her... 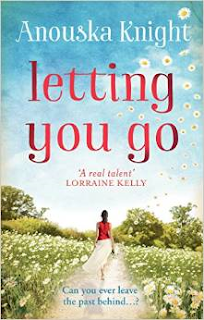 Alex Foster is not in a great place. She’s in her late twenties, trying to live her life in as small and inconspicuous a way as possible because she doesn’t feel that she deserves any of the opportunities denied to her younger brother, Dill.


Dill’s accident happened on Alex’s watch and there is absolutely nothing Alex can ever do to change the consequences of that one, brief lapse in concentration. Alex’s case isn’t helped by the fact that instead of watching Dill, Alex had been preoccupied in the bushes with her boyfriend at the time, Finn. As a result, there’s nothing Alex can ever do to repair the damage done to her relationship with her father, a man who has seemingly done his best to keep Alex at arm’s length from her old life.


I really felt for Alex when writing Letting You Go, I think mainly because she is so identifiable. She’s just a nice, decent girl who made an easy mistake as a seventeen year old that, for all the wishing in the world, she can’t ever take back. A decade on, Alex is carrying her guilt around with her because that’s all she can do to pay penance somehow.


Keeping a low profile living hundreds of miles away was going okay for Alex, sort of. But when her mother falls ill Alex has to face up to her father again, the town she left behind and the old ghosts she simply can’t hide from any more.


But Alex isn’t the only one with a past she’d do anything to change. In many ways, Alex’s preoccupation with her own inadequacies has blindsided her. She’s surrounded by secrets she never sensed were there before. Even her father and sister seem to be holding out on her.


Throughout the course of Alex’s journey, she learns that she doesn’t know all there is to know about the people around her, that she isn’t the only Foster who has inadvertently hurt the ones they love, and that there were other factors influencing the course of events that led up to Dill’s accident that day. That said, forgiving those individuals turns out to be far easier than forgiving herself.


Alex has to learn how to stand tall again. How to not shy away and hide from the love in her life, but to fight for it.