Cover reveal for Holly Martin's The Revenge (The Sentinel series)

It's cover reveal time!  The Revenge, the new book by Holly Martin is the third book in The Sentinel Series. 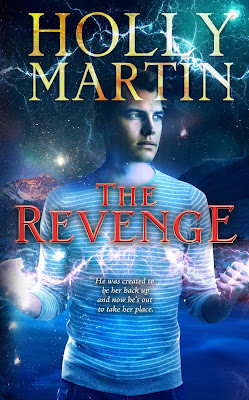 After the Oraculum orders Eve’s execution, she has to flee her home in the fort as those that have been guarding over her are forced to turn against her. Amongst the chaos, a new Sentinel is named. Adam, Eve’s half-brother.

Adam has spent his life incarcerated by the Oraculum while Eve was allowed to grow up with a family and friends. Now he is hell bent on revenge. He rules over his Guardians and his new kingdom with arrogance and a cold heart, but his one ambition is to make Eve’s life a living hell. Nowhere is safe from him, not even her dreams.

With the threat from the Putarians moving closer, her own Guardians betraying her, the survival of the world hinges in the balance.

Above all else, Adam must be stopped. But when Eve has a prophecy of her and Adam saving the world together, she quickly realizes she needs to work with him not against him.

But can Eve get through to Adam before it’s too late? Or will Adam’s evil heart result in the destruction of all?

It’s a book you HAVE to read, because it’s incredible. An outstanding book that has left me bereft its finished. I wished I’d savoured it for longer. This book was one of those that once you started it was impossible to come away from. It was fast paced, exciting, full of suspense and action that had me gasping in shock at twists I never imagined could happen. It’s a story of courage and adventure. And no matter how dark it gets, there’s always love and hope. – Victoria Loves Books Blog


If you want to pre-order this book so it pops straight onto your kindle on December 1st then pop over here. Its only 99p/99c


And if you haven’t read the first two books in the series yet, then pop over here and get your copy, all three books are 99p/99c at the moment