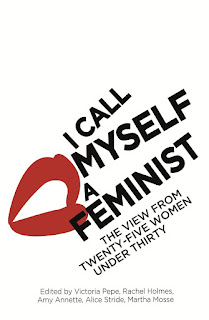 Is feminism still a dirty word? We asked twenty-five of the brightest, funniest, bravest young women what being a feminist in 2015 means to them.

We hear from Laura Bates (of the Everyday Sexism Project), Reni Eddo-Lodge (award-winning journalist and author), Yas Necati (an eighteen-year-old activist), Laura Pankhurst, great-great granddaughter of Emmeline Pankhurst and an activist in her own right, comedian Sofie Hagen, engineer Naomi Mitchison and Louise O'Neill, author of the award-winning feminist Young Adult novel Only Ever Yours. Writing about a huge variety of subjects, we have Martha Mosse and Alice Stride on how they became feminists, Amy Annette addressing the body politic, Samira Shackle on having her eyes opened in a hostel for survivors of acid attacks in Islamabad, while Maysa Haque thinks about the way Islam has informed her feminism and Isabel Adomakoh Young insists that women don't have to be perfect. There are twelve other performers, politicians and writers who include Jade Anouka, Emily Benn, Abigail Matson-Phippard, Hajar Wright and Jinan Younis.
Is the word feminist still to be shunned? Is feminism still thought of as anti-men rather than pro-human? Is this generation of feminists - outspoken, funny and focused - the best we've had for long while? Has the internet given them a voice and power previously unknown?

I was incredibly excited when I was approached to take part in the blog tour for I Call Myself a Feminist.  Although it's only over the past few months that I've actively started reading feminist non-fiction, I have to say that this collection particularly interested me, partly because the essays were written by such a diverse selection of young women.  Although there have been some mainstream feminist books which have hit the bestseller lists (Caitlin Moran and Amy Poehler's for example), I Call Myself a Feminist appealed because the essays were by women from all walks of life.  I have to say, I wasn't disappointed.

The issues covered were equally as diverse - female genital mutilation, rape, sexual consent, women and careers, motherhood to name just a few - and every viewpoint gave me something different to mull over.  It's an inspirational book which is sadly still necessary in the twenty-first century, but one which examines what it means to be a feminist today.  It proves that feminists do not fit one stereotype.  It proves that feminism means something different to each individual.  Personally, I think this is a major contributing factor to the rise in people identifying as a feminist - it's certainly enabled me to feel more comfortable using the term in relation to myself.

Powerful, relevant and extremely accessible, I Call Myself a Feminist should be essential reading.  It's empowering. It's enlightening.  It's thought provoking.  It's downright brilliant. 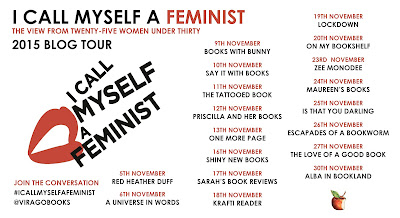