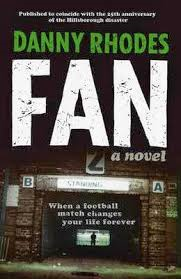 In Fan, Danny Rhodes (a Nottingham Forest fan who was at Hillsborough himself on the day of the disaster) has written a novel which explores how the Hillsborough disaster affected so many people.  John Finch, the protagonist in Fan, has never recovered from the scenes he saw as a Nottingham Forest fan at Hillsborough.  Football had been his life- his friendship group had been built around supporting Forest, his wages paid for his weekend jaunts all over the country to support his beloved team.  Written as a dual timeframe novel with flashbacks to the 1988-89 season and with the 'present day' as 2004 (the year Forest's legendary manager Brian Clough died), the reader is given an insight into the troubled mind of Finch.  His ability to work, his relationships and his mental state have all been affected by the tragedy, and as he returns to Nottingham for a funeral he learns how his old friends have coped with the weight of observing such a devastating event.

Fan isn't an easy book to read.  I am a football fan myself and I now live in Sheffield.  I have been to Hillsborough a number of times and sat in the Leppings Lane end during the Sheffield derbies.  I was at an FA Cup semi final myself just two days ago.  That twenty five years ago today, ordinary people just like me, set off to support their team and never returned home-it is heartbreaking.  I have often thought of the fans at Hillsborough that day.  Not just those who died, but those who watched, helpless, as fans around them lost their lives.  Danny Rhodes has taken that thought further, creating a piece of 'faction' which is painful and deeply moving.

However, as a novel it is superbly written, full of juxtapositions which gave me pause for thought.  It is dark and gritty, as you would expect with the subject matter, but is also incredibly emotive.

Fan is about football.  But it is also about community, compassion, belonging; living, dying, bereavement, PTSD. It is a truly unique book which I am sure was exceptionally difficult for Danny Rhodes to research and write.  I hope it gets the acclaim it deserves.

The 96 will never walk alone.  I sincerely hope that anyone else affected by the tragic events of 15th April 1989 never will either.

Fan is out today, published by Arcadia.

With thanks to the publisher who provided me with a copy of this book in return for an honest review.