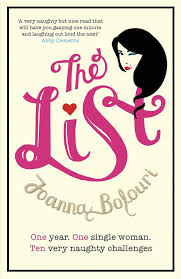 Phoebe Henderson has been single for a year.  She's naturally wary of men, and indeed sex, after finding her last boyfriend in bed with another woman.  She's lost trust in the opposite sex and life for Phoebe is, frankly, the epitome of vanilla.

But new year, new challenge, new Phoebe.  In a conscious effort to spice up her life, she conjures up a list of 10 raunchy resolutions.  What follows is a year of sexual awakening and emotional confusion....

I really loved The List.  Firstly, it is laugh out loud funny.  Loads of books claim to be, but very few actually have me guffawing uncontrollably in public places.  I apologise now to the people on the 44A bus, I know there was one moment where I actually snorted like a piglet.  But if you read this book, you will probably do the same.  Don't say I didn't warn you.

The List is a reminder of just how much life can change in a year, and for Phoebe Henderson it certainly does.  I am convinced it will for Joanna Bolouri too.  She's written a cracker of a book.  I really hope it is as successful as it deserves to be.

The List is out on Thursday 10th April 2014, published by Quercus.

With thanks to the publisher for providing me with a review copy in return for my honest opinion.
Posted by Katey Lovell at 02:30